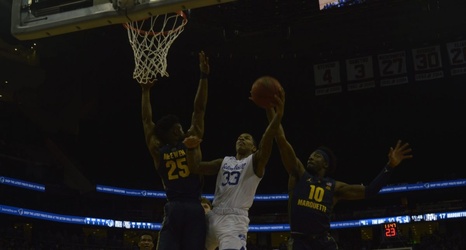 Physical, hard-nosed basketball. That is the name of the game whenever Seton Hall and Marquette take the floor.

Saturday’s matinee affair did not disappoint in that regard. For 40 minutes, the Pirates and the Golden Eagles duked it out in front of a capacity Prudential Center crowd that provided a March-like atmosphere. The end result? Seton Hall’s sixth straight win, fourth straight conference victory and third straight triumph over Marquette by a final score of 69-55.

With the win, Seton Hall improves to 4-0 in Big East play for the first time since 1992-93, a year in which the Pirates won both the regular season and conference tournament titles.