Powell’s monster game not enough for Seton Hall to knock off No. 3 Michigan State 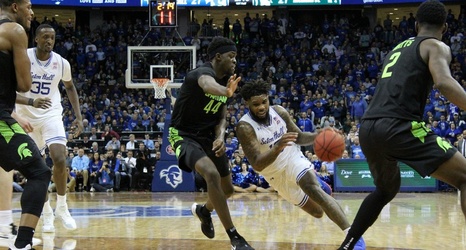 With the Prudential Center filled to capacity and rocking with the return of Myles Powell less than a week after he sprained his ankle against Stony Brook, the stage was set for Seton Hall to take home its biggest non-conference win in two decades in dramatic fashion.

Unfortunately for the Pirates, it was simply not meant to be.

Despite some heroic play from Powell, who finished with a season-high 37 points, down the stretch, Michigan State did just enough to come away with a 76-73 win to hand the Pirates their first loss of 2019.

Down 74-73 with 20 seconds left, Seton Hall had a chance to take the lead, but Sandro Mamukelashvili was met at the rim and denied.