What We Learned From Alabama's 49-10 Win Over Tennessee 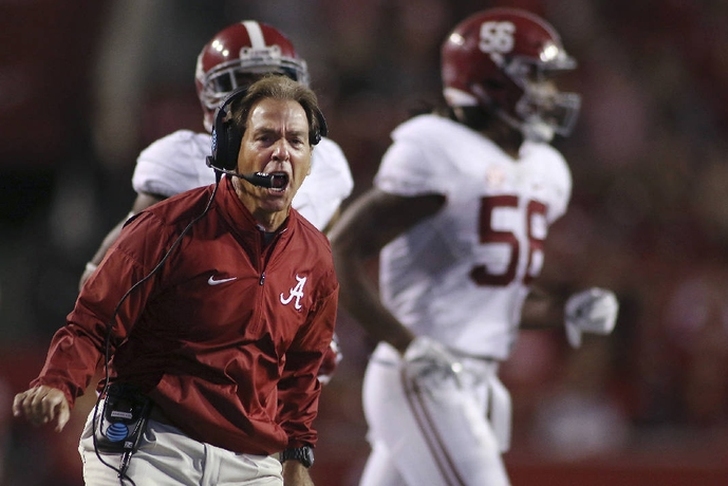 The Alabama Crimson Tide have had plenty of big wins this season, but this might was the most impressive victory yet for Nick Saban's squad. Alabama rode a dominant defensive performance and got a big game from quarterback Jalen Hurts on their way to a 49-10 win on the road over Tennessee. It is the Tide's 10th straight wins over the Vols. Now past the midseason point for both of these teams, here are three takeaways from the game:

3) Jalen Hurts is a Heisman contender
He's not a favorite, but in a race that's short on real contenders, Hurts' performance in this game put him right up there in the second tier of candidates behind Lamar Jackson and Deshaun Watson. His passing numbers were fine (16/26,143 yards, INT), but he also ran for 132 yards and THREE touchdowns on just 12 carries. More impressively, he played his best in response to mistakes. His 45-yard TD run came on the drive after he through the interception, and he routinely extended drives by making smart plays.

Hurts has now put himself in a position where a breakout game or two will generate some serious Heisman buzz for him.

2) Without the magic, Tennessee's offense is an issue
This was really the first game of the season in which Tennessee did mount a second half comeback, and they could've certainly used one. Given, it's hard to do anything against Alabama's defense (more on them below), but these are really the problems that have plagued the Vols all season. The Vols rank 103rd in the country in first half points per game (9.7), and when they don't catch that spark you're relying on them catching in the second half, it's a unit that needs improvement in all areas.

1) Alabama's defense is the best in the country
You can Michigan's defense, Ohio State's defense, or whoever else you want - no one is playing better than the Tide right now. After Tennessee gained nearly 700 yards of total offense against Texas A&M, the Tide only allowed 163 yards (including only 32 rushing) and just 1 first downs. However, what's more impressive is the continuation of their touchdown streak. Ronnie Harrison's 58-yard pick six extended their streak to nine straight games with a non-offensive touchdown.

Eddie Jackson added a punt return touchdown in the fourth quarter, giving Alabama 11 non-offensive touchdowns this season (so the Tide's defense/special teams outscored Tennessee's offense). Add all of that up, and you have the best defense in the nation.