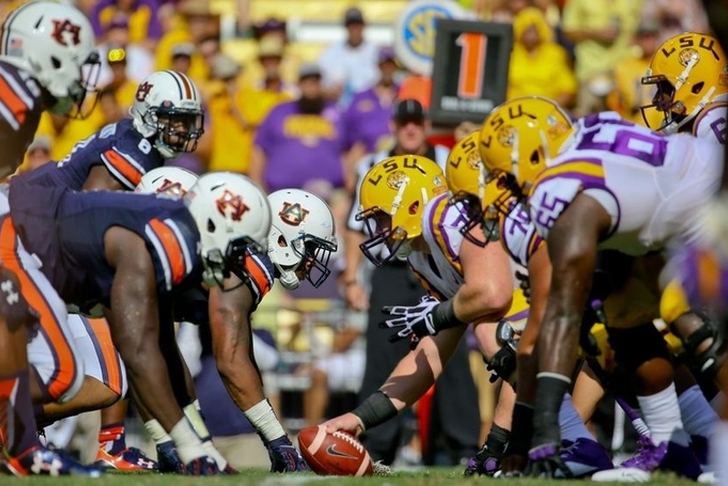 The college football season is still months away, but that doesn't mean the excitement around the season isn't there. The goal for the top SEC teams is once again to win a conference title and hopefully make it to the College Football Playoff. And Vegas has now revealed which SEC teams it thinks are in the best position to capture a conference crown.

The teams are based on the over/under win totals for several college football teams in 2017 as compiled by CG Technology, a Vegas Sportsbook. The cut-off for the top teams was six, as any other team (like Texas A&M and Arkansas) was at seven wins or fewer. Just for fun, I've also included a brief write-up. The teams are based on reverse alphabetical order if they are tied. With that in mind, here are the five teams Vegas thinks are the best in the SEC.

6. Tennessee Volunteers (7.5 wins)
Here's the real question I take away from this: if Tennessee gets only seven wins and finishes only third in the SEC East, does Butch Jones keep his job? The Vols lost a lot of talent from last year's team that won nine games and a drop-off could put Jones firmly on the hot seat. And the schedule doesn't do the Vols many favors. They visit Florida in Week 3 and a home game against Georgia Tech could be an upset. There's a likely loss to Alabama in October that's preceded by a trap game against South Carolina. On the bright side, the Vols do get Georgia and LSU at home. The games against UGA and UF will determine if the Vols get above seven wins and likely who wins the SEC East.

5. Georgia Bulldogs (8 wins)
The hype train hasn't totally taken off for Georgia but with so many of their starters/backups back, there's reason for optimism. A road game against Notre Dame in Week 2 will be huge for both teams and a road game against the Vols could put the winner in good position for the SEC East. The World Largest Outdoor Cocktail Party game against Florida could decide the SEC East winner in late October. UGA also get two tricky road games in the final three weeks: Auburn and Georgia Tech.

4. Florida Gators (8 wins)
It's not a coincidence the top three SEC East teams are clustered together. The Gators get a tough draw to open the season, playing Michigan. Then in Week 3, there's a huge home game against Tennessee. The Gators' chance of passing eight wins will be heavily influenced by what happens in those games. UF does catch a break with LSU and Texas A&M at home, plus the game against Georgia. Florida State is a home game to end the season. With a tough out-of-conference schedule and several good SEC schools on the schedule, it's a bit of a compliment that Vegas thinks the Gators can still rank the same or above the top SEC East times.

3. Auburn Tigers (8 wins)
The Auburn and QB Jarrett Stidham hype train could take off early in the year if they beat Clemson on the road. There's a bit of a lull in the schedule after that, until a very tough second half. The Tigers visit LSU, Arkansas and Texas A&M in three straight games before hosting Georgia. And of course, there's that Iron Bowl game to end the year.

2. LSU Tigers (9 wins)
The early season isn't too tricky, but things get tough for LSU in the second half. They go to Florida, host Auburn and then have road games against Alabama and Tennessee. Vegas thinks LSU will be able to win at least one of those games, but they are clearly behind Alabama in Vegas' eyes. There's a full 1.5 game difference between the two teams.

1. Alabama Crimson Tide (10.5 wins)
Surprise, surprise, Alabama is at the top. The FSU game is must-watch, but even a loss wouldn't kill Alabama's CFP hopes. An early October road game against Texas A&M could be tricky and there's a chance the season finale against Auburn (a road game) is for the SEC West crown. But Alabama gets LSU and Tennessee at home to make things slightly easier. Plus, the last time Alabama failed to reach 11 regular season wins was in 2010.