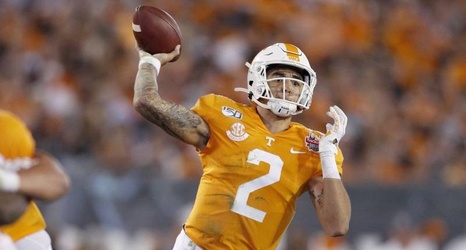 The Tennessee Volunteers won their sixth straight game by defeating the Indiana Hoosiers 23-22 in the Gator Bowl at TIAA Bank Field in Jacksonville, Florida, Thursday night.

It's the 8-5 Volunteers' first bowl win since the 2016 Music City Bowl, and it looked to be unlikely for the majority of the evening.

Tennessee trailed 22-9 with 10:27 remaining in the fourth quarter. Starting quarterback Jarrett Guarantano was pulled in the third quarter following a pick-six but re-entered for backup Brian Maurer after one series. Guarantano then led the Volunteers on back-to-back touchdown drives late in the final period to take the lead.