Nick Saban Named One of the World's Greatest Leaders: Ridiculous but Fitting 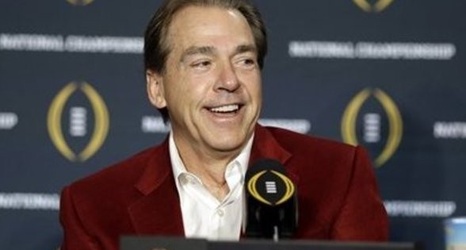 TUSCALOOSA, Ala. — Every year when the University of Alabama football program holds fall training camp, Nick Saban lines up a guest speaker to address the team each night.

He’s had some doozies over the years.

They include Dewey Bozella, who spent 26 years in prison for a murder he did not commit (and at age 52 wanted a chance to fight a sanctioned boxing match—which he won), Michael Franzese, the former New York mobster with the Colombo crime family and too many others to list in this space.

For this year’s camp Saban may just want to print out a copy of Fortune’s annual list of the "World’s 50 Greatest Leaders" that was released on Thursday morning and invite everyone who was on it ahead of him.