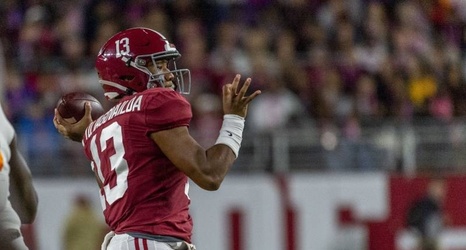 Alabama quarterback Tua Tagovailoa was taken to the locker room during the second quarter of Saturday's game against Tennessee with an apparent lower-leg injury, according to Joseph Goodman of AL.com.

Tagovailoa went down after being tackled around the ankles by Volunteers defensive lineman Greg Emerson. He stayed in the game for one more play before being replaced by sophomore Mac Jones.

Tagovailoa was 11-of-12 passing for 155 yards, zerotouchdowns and one interception

The 20-year-old threw for 3,353 yards and 37 touchdowns against four interceptions in 2018, his first year as the full-time starting quarterback.