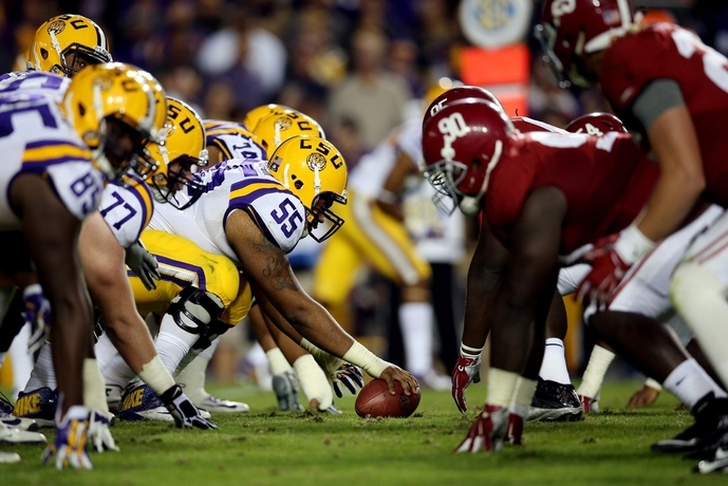 Week 10 of SEC Football is shaping up to a great one. While several of the games are pegged as blowouts, we get the SEC Game of the Year this weekend, as LSU plays Alabama. But we're not here just for that game. Here's our SEC Weekend Preview - Everything You Need To Know About Each Game In Week 10:

Where To Watch: ESPN, Noon ET

The 7-1 Gators can clinch an outright SEC East title with a win over Vandy Saturday. Vanderbilt is 3-5 and this is a game UF should win easily.

It's been a tumultuous past week for Georgia. After a bad loss to Florida, in which the Bulldogs had no semblance of an offense, rumors flew that UGA was about to make coordinator changes. Nothing happened, but it seems like Georgia is totally dysfunctional right now. It's been a disappointing 5-3 season for Georgia, although they are heavily favored over a 4-4 Kentucky squad that is trending upwards and building the right way under Mark Stoops.

The Rebels have rebounded after a loss to Memphis with back-to-back wins over SEC schools. At 7-2, Ole Miss isn't out of the SEC West race yet, but they need to win out and catch a few breaks. Now in his third year, Arkansas head coach Bret Bielema has matched his career SEC wins entering this season with two wins this year, thanks to a win over Auburn last week. Arkansas is 4-4 and could use a win to keep their bowl hopes alive.

With games against Clemson and Florida still ahead, 3-5 South Carolina pretty much needs a win this week to make a bowl game. Unfortunately for the Gamecocks, the 4-4 Vols are heavily favored for good reason. Tennessee is fresh off a big win over UK and another win would give them back-to-back victories for the first time this season. With three easy games up after the Gamecocks, the Vols could very well finish the season 8-4.

At 4-4, Auburn is trying to help salvage a very disappointing season with a win over 7-2 Texas A&M. For the Tigers, they'll need another monster game from RB Peyton Barber. A&M is starting freshman QB Kyler Murray once again, and the dual-threat has shown he can make plays. This seems like small line, so perhaps Vegas knows it'll be a close game.

It's not just the game of the week, it might be the game of the year so far. It's an early-season College Football Playoff elimination game, as the loser is likely out of the race. 7-0 LSU is actually a full touchdown underdog against 7-1 Alabama. The Crimson's Tide schedule is much easier after this, while LSU still has several ranked teams left. Expect LSU to lean heavily on RB Leonard Fournette and for Bama to do the same with RB Derrick Henry. This is must-watch football.