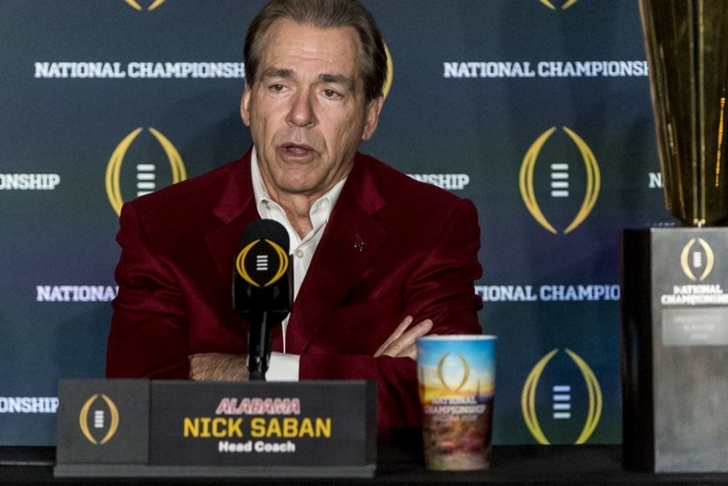 No conference dominates college football recruiting quite like the SEC does. It's why the conference has been the best in the nation for a decade and home to more top teams than anywhere else. It has created an incredible sense of competition off-the-field to match the competition on it, and that is the case again with this recruiting class. There is still several months until National Signing Day, but here is how all 14 recruiting classes stack up against each other right now:

14) Vanderbilt Commodores
Vandy usually finds themselves at the bottom of these rankings, but still find themselves ranked in the top 70 nationally. The Commodores have 11 commits in the 2017 class, nine of which are three-star prospects - headlined by quarterback Jacob Free.

13) Missouri Tigers
The only other SEC team not to crack the top 50, Missouri also doesn't have a four- or five-star player committed. However, of their 13 pledges, 12 are of the three-star variety. Surprisingly, only one (ATH Daron Davis) is from the state of Missouri.

12) Ole Miss Rebels
Ole Miss usually has one of the top recruiting classes in the entire country, but this year, they haven't been nearly as successful so far. Ranking 43rd nationally by 247sports, their 11 commits is headlined by the lone four-star in the class, WR D.D. Bowie. The Rebels are also in the mix for several more top uncommitted recruits.

11) Kentucky Wildcats
Head coach Mark Stoops has done a great job recruiting at Kentucky, and this year has the makings of yet another solid class. Their 14-person class already has two four-star prospects in WR JaVonte Richardson and ATH Tyrell Aijan, both of whom are from Ohio.

10) Arkansas Razorbacks
The 10th best recruiting class in the SEC is No. 24 in the country. Their 19-person class hits every position on the field, with 15 three-star prospects and three four-star guys (safety Montaric Brown, tight end Jeremy Patton and running back Chase Hayden).

9) Mississippi State Bulldogs
The first top 20 call on this list, the Bulldogs have the third-most commits of anyone on this list with 20 already in hand (13 from the state of Mississippi). Four-star running back Kylin Hill and four-star quarterback Keytaon Thompson are the headliners of the class.

8) South Carolina Gamecocks
Head coach Will Muschamp is putting together a top recruiting class in his first full year on the job, and they currently rank 16th nationally with 20 commits, all of whom are three- or four-star recruits. CB Jamyest Williams, the No. 56 overall prospect in the country, is the gem of this class.

7) Auburn Tigers
Now we're starting to get to the cream of the crop. Auburn is no stranger to landing top recruits, and another future star appears to be headed their way in five-star offensive tackle Calvin Ashley. He is joined by seven four-star prospects and three-star recruits.

6) Florida Gators
Florida has the No. 14 class in the country despite not having a single five-star commit - but that's because nine four-star guys have already pledged to the Gators. Defensive end Zachary Carter, wide receiver Daquon Green, cornerback Elijah Blades and defensive tackle Fred Hansard are all ranked in the top 200 individually.

5) Texas A&M Aggies
The Aggies have the second-most commits in the conference with 22 to their name, headlined by four-star quarterback Kellen Mond, who is ranked as the No. 3 dual threat QB in the country.

4) Tennessee Volunteers
The No. 10 class in the country, Tennessee already has close to a full recruiting class with 24 commits. Only four of them are four-star recruits, but safety Maleik Gray (No. 56) and running back Ty Chandler (No. 83) are top 100 prospects.

3) LSU Tigers
Even with a question at head coach after the firing of Les Miles, the Tigers have the No. 4 class in the country. 19 recruits are committed to LSU next fall, headlined by five-star safety JaCoby Stevens. Four-star prospects Tyler Shelvin (DT), Austin Deculus (OT), Jhamon Ausbon (WR) and Grant Delpit (S) are ranked as top 80 recruits.

2) Georgia Bulldogs
Kirby Smart is certainly making the most of his first full recruiting class at UGA. Five-star safety Richard LeCounte III is the prized jewel of the class, but 11 four-star commits show how well-rounded this class is.

1) Alabama Crimson Tide
Alabama has reeled off five straight No. 1 recruiting classes, and even though they currently rank No. 2 in the country right now, they could very well finish there again. Of their 22 pledges, 11 are four-star recruits and four five-star guys. Running back Najee Davis, the top recruit in the country, headlines the class, but linebacker Dylan Moses (No. 4 nationally) and offensive tackle Alex Leatherwood (No. 7 nationally) give them plenty of talent.