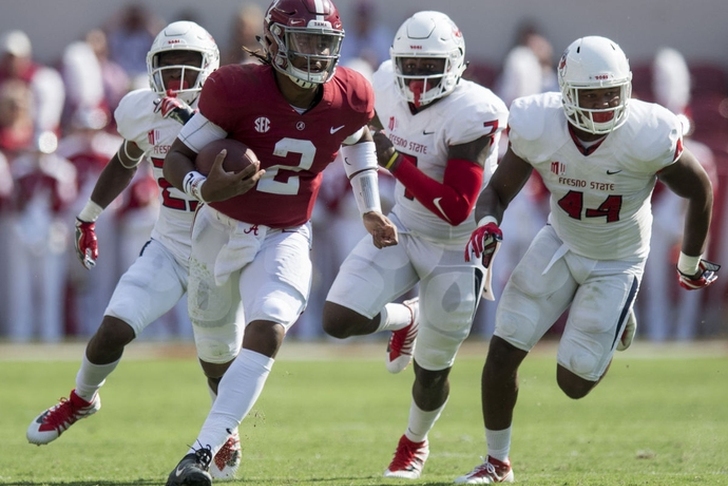 The SEC has had an up-and-down first two weeks of the season. Nine teams in the conference are still undefeated and some have picked up big wins, but there have been others that have fallen flat in big games. While it's still early, here are our SEC Power Rankings heading into Week 3 of the college football season:

14) Missouri Tigers (1-1)
Mizzou had trouble stopping Missouri State in the opener, they were soundly beaten at home in a 31-13 defeat to South Carolina. Drew Lock is one of the conference's best quarterbacks...but there isn't much else going for the Tigers right now.

13) Arkansas Razorbacks (1-1)
Following an easy win over Florida A&M, the Razorbacks were surprisingly outmatched physically by TCU, losing 28-7. Saturday's home game against Texas A&M may be crucial to their season.

12) Texas A&M Aggies (1-1)
That crushing loss to UCLA seemed to carry over for the Aggies, who only beat Nicholls by 10 points. Kellen Mond doesn't look great under center and it's clear that Kevin Sumlin is feeling the pressure. They will try to turn things around against UL-Lafayette before opening the conference schedule.

11) Kentucky Wildcats (2-0)
The Wildcats are undefeated, but it doesn't feel like it. A 24-17 win over Southern Miss was nice, yet only beat Eastern Kentucky at home by 11. Kentucky will open their conference slate Saturday against South Carolina. Are they for real? We'll find out.

10) Vanderbilt Commodores (2-0)
Vanderbilt's two wins over Middle Tennessee and Alabama A&M haven't told us much about them, but both victories were convincing. They've taken care of business to this point but start an extremely difficult four-game stretch - Kansas State, Alabama, Florida, Georgia - starting this weekend.

9) Ole Miss Rebels (2-0)
Quarterback Shea Patterson looks like the real deal, throwing for 918 yards and nine touchdowns in just two games. However, those games came against South Alabama and UT-Martin - and were closer than expected. The Rebels have their first "prove it" game Saturday at Cal.

8) Florida Gators (0-1)
Quarterback is still a major concern for Florida (shocking, I know), but I'll give them something of a pass considering how good Michigan's defense is. After having their game against Northern Colorado canceled due to Hurricane Irma, the Gators have another tough test in Tennessee. Will their defense be able to carry them?

7) Auburn Tigers (1-1)
Speaking of terrible offense, maybe Jarrett Stidham isn't the answer for immediate success at Auburn. That 14-6 loss to Clemson was ugly, but in Stidham's defense, he was sacked 11 times. Lackluster offensive line play and poor playcalling (and Clemson's defense being really good) never allowed the offense to get going. It looks like Gus Malzahn and new offensive coordinator Chip Lindsey are having trouble meshing their two philosophies.

6) Mississippi State Bulldogs (2-0)
Mississippi State has looked every bit as good as expected with dominant victories over Charleston Southern and Louisiana Tech, but again, the Bulldogs haven't been able to prove anything against lesser competition. They'll get their chance Saturday against LSU.

5) South Carolina Gamecocks (2-0)
South Carolina has been outgained by both NC State and Missouri yet won both games. The defense is still a work in progress and the running back has been inconsistent, but the Gamecocks have been finding ways to make plays. Deebo Samuel has five total touchdowns through two games, including two kickoff return touchdowns. If they can beat Kentucky at home on Saturday, Will Muschamp's squad will be worth looking out for.

4) Tennessee Volunteers
The Vols followed up their comeback win over Georgia Tech with a taking-care-of-business win over Indiana State. It seemed like this young team has finally settled into a groove and will gain even more momentum if they can beat Florida again.

3) Georgia Bulldogs
As ugly as the game was at times, Kirby Smart finally picked up a marquee win with Georgia's 20-19 win over Notre Dame in South Bend. There seems to be an ongoing quarterback battle between Jacob Eason and Jake Fromm, but both have gotten the job done to this point. A game against Samford will essentially be a glorified scrimmage for them this weekend.

2) LSU Tigers
LSU has been as impressive as any team in the SEC. They didn't allow BYU's offense to cross mid-field a single time and blew out Chattanooga. Danny Etling and the offense haven't been tested yet, but also haven't looked great. They'll get that test Saturday against Mississippi State.

1) Alabama Crimson Tide
As Dennis Green once said...they are who we thought they were!

The Tide have been nothing short of dominant this season, rolling past Florida State in the opener before a predictably easy win over Fresno State. Jalen Hurts hasn't been great in the downfield passing game, but this defense and rushing attack are more than enough to keep Alabama in the top spot nationally, let alone in the SEC.

Follow our SEC page for all the latest SEC football news!