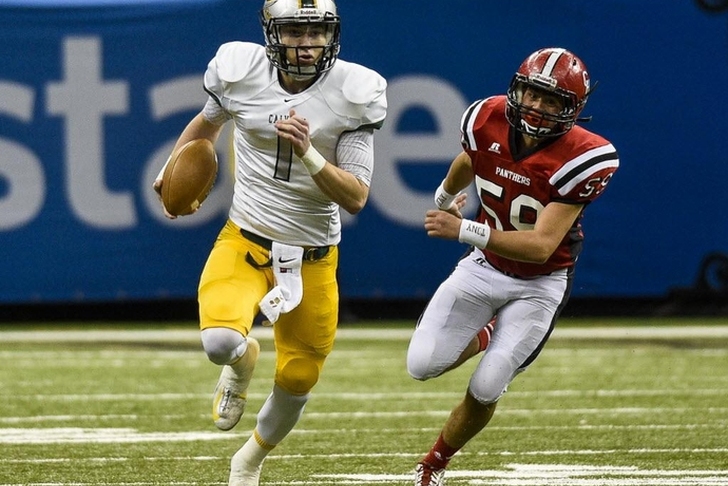 The SEC is one of the best conferences in college football. It's a recruiting powerhouse and constantly brings in the best talent. The conference can recruit with the best, and it's not surprising that conference already has five five-star players committed. This is based on Rivals.com's rankings and every player on this list is a top 40 overall recruit. With that in mind, here are SEC Football’s 10 Best Committed Recruits For 2016 So Far:

10. Saivion Smith, S, LSU
Smith is the top safety in the 2016 class. The four-star is the No. 9 player from Florida and the No. 38 overall player. He could be the next great LSU defensive back.

9. Chauncey Gardner, CB, Florida
Gardner is the No. 3 CB in the 2016 class and the No. 8 player from Florida. He's the No. 35 overall player and could be the heir apparent to Vernon Hargreaves.

7. Feleipe Franks, QB, Florida
Franks was committed to LSU, but flipped to the Gators at the end of November. He's the No. 2 pro-style QB and the No. 6 player from Florida. The No. 29 overall player is a four-star recruit could start right away for the Gators.

6. DeKaylin Metcalf, WR, Mississippi
Metcalf is the highest rated four-star recruit on Rivals. He's the best player in the state of Mississippi and hails from Oxford. He's the No. 24 overall player and the third best WR. He looks like the replacement for Laquon Treadwell.

5. Jonah Williams, OL, Alabama
This is Alabama's only player in the top 10, although that could very well change by signing day. Williams is from California, so he'll head across the country to play for the Crimson Tide. He's the nation's 19th ranked player and the second best offensive tackle. He could be the next great Alabama lineman.

4. Marlon Davidson, DL, Auburn
Davidson is the first of four top 10 players the SEC already has. He's the top rated defensive end in the nation and the second best player from Alabama. He's the No. 9 overall player and has already signed a financial aid agreement with the Tigers.

3. Jacob Eason, QB, Georgia
Eason opened up his recruitment and nearly left the Bulldogs to go to Florida after Mark Richt left. However, Eason will be staying with UGA. He might give the team the QB they've been searching for. He's the No. 6 player in the nation and the best player from the state of Washington. He's the nation's top pro-style QB.

2. Gregory Little, OL, Mississippi
Little hails from Texas, but Ole Miss still found a way to land him. He's the best OT in the nation and the best prospect from Texas. The No. 4 overall player looks like he'll be another great offensive lineman for the Rebels, joining recent players Laremy Tunsil and Michael Oher.