Here Are The 10 Best SEC Football Games In 2017, Including Non-Conference 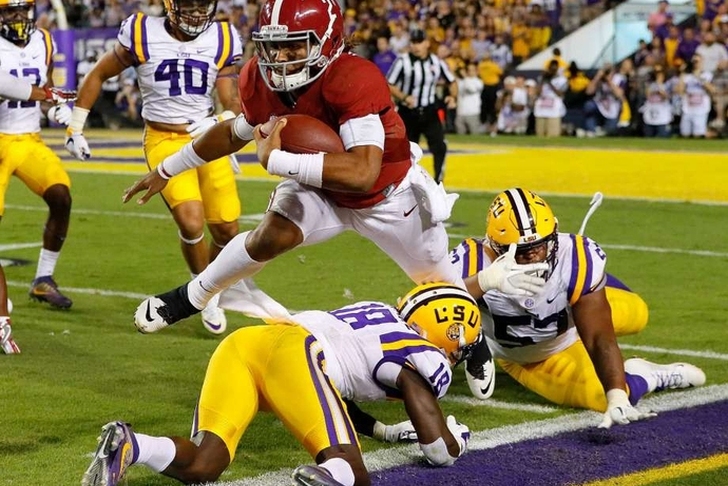 The 2017 college football season doesn't start for several months and spring practice hasn't even started yet. However, we're already pining for the return of Saturdays full of football. And since the SEC is still the king of college football, there is even more intrigue surrounding the conference's biggest games. Here are the 12 best games teams across the SEC will play next season:

9) Auburn Tigers at LSU Tigers - Oct. 14
From quarterbacks to running backs. LSU's Derrius Guice is poised to be one of the best running backs in the conference taking over for Leonard Fournette, while Auburn's Kamryn Pettway solidified himself as one of the SEC's best rushers last season.

8) LSU Tigers at Florida Gators - Oct. 7
There is some real hatred between these two teams after the show re-scheduling fiasco this past season due to Hurricane Matthew. Last year's game also went down to the final minute. Will there be a repeat performance this year?

7) Georgia Bulldogs at Notre Dame Fighting Irish - Sept. 9
This will be a fun non-conference game. Notre Dame doesn't have the highest of expectations going into the 2017 season, but this will still be a tough road test for a Georgia team that's expected to have a breakthrough season. This game may tell us if they will or not.

6) Ole Miss Rebels at Alabama Crimson Tide - Sept. 30
Ole Miss has played Alabama as well as anyone over the last three years, winning two in a row before nearly pulling off the upset again in 2016. The Rebels don't have the highest expectations next season, but given their history against the Tide, this will be a game worth watching.

5) Auburn Tigers at Clemson Tigers - Sept. 9
Clemson - the national champions - wasn't able to beat Auburn until the final play of their game in 2016. Now, with Clemson expected to take a step back and Auburn expected to get a boost from Baylor transfer quarterback Jarrett Stidham, this game should be another thriller.

4) Florida Gators vs. Georgia Bulldogs - Oct. 28
The artist formerly known as the World’s Largest Outdoor Cocktail Party is expected to determine the SEC East champ this season. Both teams also have College Football Playoff aspirations this year, so this could have major national implications as well.

3) Alabama Crimson Tide at Auburn Tigers - Nov. 25
Auburn's defense and running game have always been good. Now, they're getting a top quarterback in Baylor transfer Jarrett Stidham. His ability to fit this system could make Auburn a surprise team in 2017, making them a tough test against Alabama - especially since that game is at Auburn.