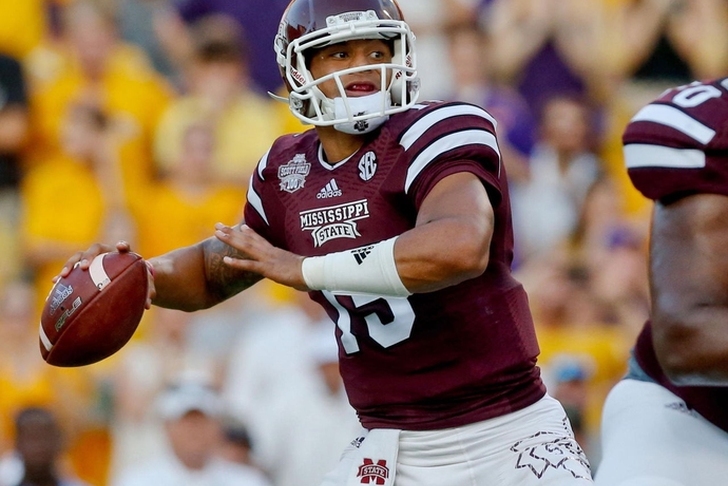 This week provided us with the first matchups within the conference, along with some teams who struggled with their non-conference opponents. Here's how each team ranks after the second week of the 2015 season:

Vanderbilt forced Georgia into a slow start, but the Commodores' miscues on special teams coupled with turnovers eventually sealed their fate. Vandy did hold Bulldogs' star running back Nick Chubb from crossing the goal line, but Georgia's second-string back, Sony Michel, did score on a 31-yard run that put Georgia up by 11 points in the first half. Despite the three interceptions, Vanderbilt fans have to recognize the improvement in their offense after they posted 400 yards against a stiff Georgia defense. The Commodores will get a nice tune-up next week against Austin-Peay before hosting an explosive Ole Miss offense in week four.

The Razorbacks just couldn't find ways to make plays Saturday, dropping a tough loss to Toledo that knocked Arkansas out of the top 25. Arkansas was only able to score three points during the five times they reached the red zone, which allowed the Rockets to seize the day in Little Rock. Bret Bielema and the Hogs will try to get back on track when they host Texas Tech at home next weekend.

The Gators came out of The Swamp victorious after a struggle with the East Carolina Pirates, who were able to hang around until the end the ball game. Florida was sloppy in this game, committing 12 penalties that totaled 105 yards along with two turnovers. The Gators' defense allowed 346 yards passing, but held the Pirates to minus-13 yards on the ground and forced three turnovers. All maybe well that ends well, but the Gators will surely be working on the details heading into the first SEC contest on the road against the Kentucky Wildcats next weekend.

The Gamecocks allowed Kentucky to post a 17-point lead on them going into the half but showed some resolve by only allowing the Wildcats to score two points in the second half on a failed two-point conversion. South Carolina had more than enough opportunities to complete the comeback, but the Gamecocks kept finding ways to give the Wildcats the win. On top of the dissappointing loss, the Gamecocks lost their starting quarterback Connor Mitch, who left in the second quarter with a separated shoulder after diving for a loose fumble. Steve Spurrier will get back to the drawing board this week, as the Gamecocks travel to Athens to play the Georgia Bulldogs.

The Wildcats held off another second-half ralley this weekend to win their first SEC road game in six seasons. Kentucky stalled on every drive in the second half against South Carolina except their final drive, when they were able to get two first downs to finish off South Carolina's chances for a comeback win. The Wildcats look to go 2-0 in the conference this week when they host the Florida Gators in Lexington. Missouri came out on top this weekend 27-20 over the Arkansas State Red Wolves, and the Tigers allowed the Red Wolves to hang with them the entire length of the game. Maty Mauk accounted for all three of the Tigers' touchdowns, throwing touchdown passes to three different Missouri receivers. The Tigers get another non-conference opponent next weekend, hosting the Conneticut Huskies, before they begin SEC play in week four by traveling to Lexington to play Kentucky.

The Bulldogs came up short against LSU this weekend to begin their SEC schedule, and the Mississippi State defense just couldn't find an answer for LSU running back Leonard Fournette, who rushed for over 150 yards and three scores. The Bulldogs clawed their way back in the fourth quarter, but the LSU defense was able to stop a two-point conversion that would've potentially tied the game. Mississippi State missed a long field goal to end the game, on a night where 21 points was enough for the Tigers to claim victory.

The Volunteers and their fans started off with smooth sailing against Oklahoma, before squandering a two-touchdown lead in the fourth quarter. The Vols secondary surrendered two touchdown catches to Oklahoma receiver Sterling Shepard, and this much-anticipated game turned into a heartbreaker for the Tennessee faithful in Neyland Stadium. Tennessee will try to work out the kinks next weekend, when they host the Western Carolina Catamounts.

After winning their first matchup against a difficult PAC-12 team, the Aggies were able to kick back a little bit in their week two win over Ball State. Texas A&M totaled over 500 yards on offense, including three touchdown passes by Kyle Allen, en route to their 56-23 rout of the Cardinals. The Aggies up the competition a little next week when they host the Nevada Wolfpack.

The Rebels have shown off a powerful offense with Chad Kelly playing quarterback, and they score over 70 points for the second week in a row. Ole Miss will get a chance to prove themselves against a worthy opponent this weekend, when they travel to Tuscaloosa to take on the second-ranked Alabama Crimson Tide in what will be the second of two huge games in the SEC West this weekend.

Auburn falls from the number one spot in my rankings this week, after turning in a horrible showing againt Jacksonville State. I'm not sure whether the Tigers played badly due to missing some key players with injuries, or if they were suffering after winning a big week one matchup against Louisville. Either way, it took the Tigers until overtime to put away their FCS opponent, and that kind of play won't do them any favors when they open up their SEC schedule against LSU this weekend in Baton Rouge.

The Tigers opened up their season with a tough road test in Starkville against Mississippi State, which they were able to pass by using the legs of Leonard Fournette. Fournette scored all three touchdowns that allowed the Bayou Bengals to outlast Mississippi State, depsite their gutsy fourth quarter effort. The Tigers will play their first home game with an SEC West matchup against the Auburn Tigers Saturday afternoon.

The Bulldogs started slow, but utilized Vanderbilt's miscues to take home their first conference win on Saturday in a 31-14 win. Georgia still faces some questions at quarterback, and the Bulldogs will hope to answer some of those questions this week when they play host to the South Carolina Gamecocks. This game usually proves to be a close and interesting matchup, and each team will be looking to secure a pivotal victory in the race for the SEC East.

The Tide didn't let off the gas after a solid week one win against the Wisconsin Badgers, and I'm still under the impression that Alabama running back Derrick Henry is up there with Nick Chubb and Leonard Fournette as an elite running back in the conference. Alabama has played sound defense so far, and that defense faces the task of stopping an explosive Ole Miss offense in week three. This will be a fun and interesting matchup where the Tide will be seeking revenge against the Rebels, after losing to them last season.

Another week of SEC football is in the books! Be sure to follow me on Twitter @griffaldo to check out my updated work.