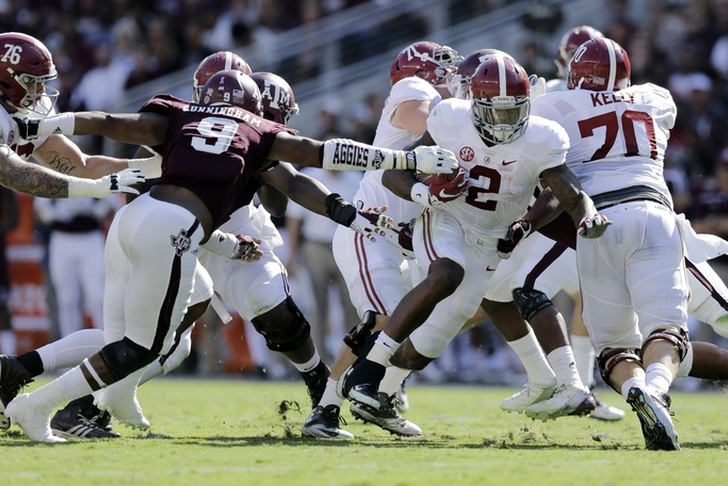 The SEC race became a tad bit more clear on Saturday, as week seven provided us with some upsets and answered some more questions about which teams are the real deal. Here's how I rank each team after week seven's action:

Vanderbilt proved to be the worst team in the conference this weekend, after a 19-10 loss to South Carolina. The Commodores committed five turnovers on a day where they couldn't do much against a Gamecocks' team that Steve Spurrier resigned from just last week.

The Gamecocks showed some resiliency this weekend after the resignation of Steve Spurrier earlier in the week. Interim head coach Shawn Elliot got the team back on track with a big conference win. Pharoh Cooper highlighted the day with seven catches for 160 yards, including a 78-yard scamper that gave the Gamecocks a huge momentum swing in the second half. South Carolina goes into their bye week this upcoming weekend, before traveling to Kyle Field to take on Texas A&M.

The Razorbacks were on a bye this week. Arkansas will host Auburn in a pivotal SEC West matchup for both teams. Bret Bielema's team will be looking for their first conference win.

The Tigers were on the losing-end of a game where both teams could only kick field goals, as Georgia held on for a 9-6 victory. This drops Missouri down to a 1-3 conference record. The Tigers were only able to generate 164 total yards on offense, with just 21 yards rushing on 22 attempts. Yes, you read that right: 21 yards on 22 attempts. Missouri converted just 2-of-13 third down conversions, and Gary Pinkel's team will try to get back in the win column against Vanderbilt when they travel to Nashville in week eight.

Kentucky put up a tough fight against Auburn, dropping a 30-27 game in Lexington on Thursday night. The Wildcats generated clost to 500 yards of total offense, with quarterback Patrick Towles throwing for over 350 yards. Running back Boom Williams rushed for 113 yards on 16 carries, including two touchdown runs and averaged just over seven yards per carry. Things don't get easier for the Wildcats, as they travel to Starkville to take on Mississippi State in week eight.

The Tigers had their backs against the wall heading into Lexington to face Kentucky, and Auburn responded with a big win. The win gives the Tigers a huge boost of confidence going into a week eight matchup on the road against Arkansas. Auburn moves their record to 1-2 in conference play and are desparate for another conference win to stay in the SEC West race.

Week seven was a difficult week for Ole Miss fans, as the Rebels lost to the Memphis Tigers 37-24. Ole Miss started the game by scoring two touchdowns and going up 14-0, but Memphis kept making big plays, completing a huge upset against a top 25 opponent. Memphis quarterback Paxton Lynch completed 39 passes for 384 and three touchdowns, with just one pick to lead Memphis to what will be their biggest win of 2015. Ole Miss will try to pick up the pieces when they travel to Texas A&M  to face the Aggies, who were crushed by Alabama in week seven.

Dak Prescott accounted for four touchdowns and threw for almost 350 yards in the Bulldogs' 45-20 win over Louisiana Tech. Mississippi State was on upset alert in the first half, as ex-SEC quarterback Jeff Driskell had led Louisiana Tech to a 17-10 lead in the second quarter. Dak Prescott and company woke up before the first half was over, scoring 21 unanswered points before putting the game away on a pick six in the fourth quarter. The Bulldogs will try to extend their two week winning streak when they host Kentucky in week eight.

The Bulldogs were able to pull out a hard-fought victory against the Missouri Tigers in week seven. Georgia's time of possesion was almost 39 minutes, but they were only able to muster nine points on three field goals. Georgia rushed the ball 45 times in their first game after losing star running back Nick Chubb to an injury during last week's loss to Tennessee. The Bulldogs head into their bye during week eight, before the big rivalry game in Jacksonville against Florida that will likely decide the SEC East.

The Vols enjoyed a bye week this weekend, which couldn't have come at a better time. Tennessee will travel to Tuscaloosa to face an Alabama team that's really embraced the underdog role after their early-season loss to Ole Miss. The Vols desparately need a victory against the Tide to stay in the SEC East race, as a loss would drop them to three conference losses.

The Gators suffered their first loss of the season against Leonard Fournette and the LSU Tigers in Baton Rouge. Florida persevered from a 14-point halftime deficit to tie the game late in the third quarter. Luck ran out for Jim McElwain's team with just over 10 minutes to play when Les Miles ran one of his signature fake field goals, that eventually proved to be the game winner. The Gators, like Georgia, go into their bye week during week eight before traveling to Jacksonville for a key game against Georgia.

The Aggies were unable to stop Alabama's rushing attack, along with Kyle Allen being the first quarterback from a power five school to throw three interceptions that were returned for touchdowns since 2008. Saturday was a day Texas A&M would like to soon forget, as the Aggies were throttled in a 41-23 loss to Alabama. The Tide set a school record with three touchdowns on defense, which proved to be the difference in this game. This was the first loss for Texas A&M, who had up until this week shared first place in the SEC West with LSU. The Aggies travel to Oxford in week eight to play Ole Miss.

Nick Saban and the Tide extended their winning streak to four games, including three conference games with a huge win over Texas A&M. Derrick Henry seems to get better and better each week, as he ran for a career-best 236 yards and two touchdowns on 32 carries. Alabama looks to make this weekend their fourth-straight conference win, as they host a Tennessee team that's fresh off a bye week.

The "Leonard Fournette Show" continued this week, as the sophomore running back rushed over 150 yard for the sixth-straight game this season. Fournetted ran the ball for 180 yards on 31 carries and added two more touchdowns to his collection. His 2015 numbers have been nothing short of spectacular, and he's the absolute clear frontrunner for the Heisman Trophy so far this season. LSU takes on Western Kentucky in week eight, and I'm sure Les Miles will have his team focused on the Hilltoppers after we saw what Memphis did to Ole Miss this past weekend. With Texas A&M and Florida losing, the Tigers are the only team that's yet to suffer a loss left in the entire conference.