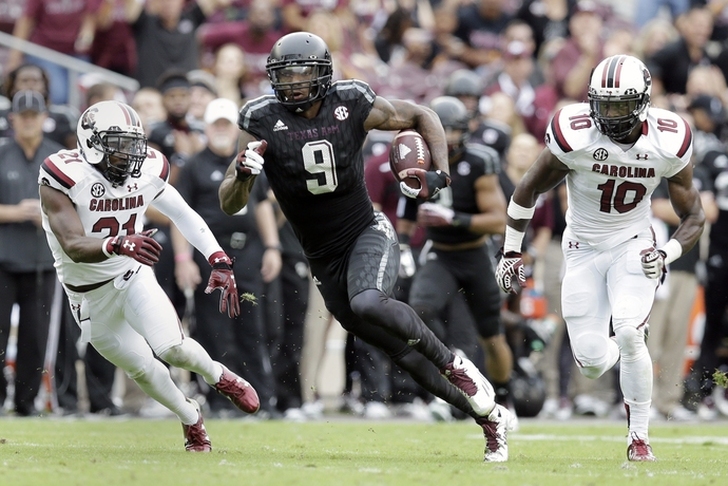 Week nine was the calm before the storm, as week 10 presents us some incredible matchups. Week nine still had it's action though, and here's how I rank each SEC team after this week's games:

After Vanderbilt won their first conference game under the leadership of Derek Mason in week eight, the Commodores simply fell flat on their face to the Houston Cougars. The Cougars shut Vandy out 34-0, holding the Commodores to just 185 yards of total offense. Vanderbilt returns to conference play next week when they travel to Gainesville to take on the Florida Gators.

Two second half interceptions thrown by Perry Orth shut the door on the Gamecocks, allowing Texas A&M to emerge victorious in 35-28 game. South Carolina's defense was able to create a couple stops at the end of the game, but Kyler Murray looked like a slightly-smaller Johnny Football while executing the Aggies' offensive scheme. The Gamecocks travel to Knoxville to face Tennessee next weekend.

The Tigers were on a bye week for week nine and will look to get things back on track Thursday when they host Mississippi State. Missouri quarterback Maty Mauk was approved to returned to the team this past week after a lengthy suspension for violation of team rules and will be eligible to play against the Bulldogs.

Since their strong 4-1 start, the Wildcats have dropped three-straight conference games. Kentucky took a beating at the hands of Tennessee in week nine, losing 52-21. The Wildcats converted just two-of-13 third downs and allowed the Volunteers to return a kickoff and a punt for second half touchdowns. Things don't get easier for Kentucky, as they'll travel to Athens to play Georgia in week 10.

The Tigers gave Ole Miss a difficult time but were unable to send the Rebels home with a loss. The Tigers came within one point of Ole Miss, but they were unable to to rally after Laquon Treadwell's 21-yard touchdown catch that sealed the deal. Things don't get any easier for Auburn, as they travel to College Station to battle Texas A&M next Saturday.

Alex Collins accounted for five rushing touchdowns and 173 yards, and the Razorbacks dominated UT-Martin 63-28 Saturday to even their record to 4-4 on the season. Arkansas has now won two-straight games for the first time this season, and that couldn't have come at a better time, as they travel to Oxford to play Ole Miss in week 10. Arkansas totaled almost 600 yards against the Skyhawks, but the Razorbacks also allowed the Skyhawks to gain over 500 yards of offense themselves.

Georgia wasn't able to be very productive against Florida in Jacksonville during week nine's action, taking a 27-3 loss from the Gators. The Bulldogs were in dire need of a victory against Florida to keep themselves in the race for the SEC East. Georgia has now gone two-straight games without scoring a touchdown, and the Bulldogs' loss Saturday put one the Gators one step closer to clinching the SEC East.

The Bulldogs were off this weekend as they prepare to play the Missouri Tigers on Thursday night during week 10. Mississippi State will be looking for their fourth-straight victory, and the Bulldogs have scored over 40 points in each of their last three victories.

The Aggies were able to hold off a determined South Carolina team in Kyler Murray's first start. The true freshman ran the Aggies' offense like a veteran, completing 20-of-28 passes for 238 yards and a touchdown. He also added 156 yards on the ground with a rushing touchdown. Murray's production guided the Aggies to a big win that allowed them to shake-off a two-game losing streak. Texas A&M will host Auburn in week 10.

Tennessee used some outstanding special teams' play to throttle Kentucky in week nine. The Vols' defense forced two turnovers while playing very efficiently on third downs. Tennessee will try to improve their record to 5-4 when they host South Carolina in Knoxville this upcoming weekend.

The Rebels were able to hold off a resilient Auburn team, as Laquon Treadwell went over 100 yards receiving for the fourth-straight game. The Rebels were able to cling on to their second place spot in the SEC West standings, where they share a spot with Alabama. Ole Miss will host Arkansas in week 10 and try to grab their third-straight win.

The Gators handled their business against Georgia, beating the Bulldogs 27-3. Florida's defense turned in a fantastic performance where they held Georgia to 69 rushing yards on 22 attempts. That Gators' defense also intercepted Georgia quarterback Faton Bauta four times, and Florida scored off a Bulldogs' special teams miscue where Reggie Davis fumbled a punt return that was recovered by Florida's Nick Washington for a touchdown. Florida can clinch the SEC East with a win over Vanderbilt next week in the Swamp.

Alabama was off in week nine, and the Tide will host the first-place LSU Tigers at Bryant-Denny Stadium next Saturday in what will be the biggest game of the year in the SEC West.

Leonard Fournette's legs got some much-needed rest this weekend, prior to the biggest game of his collegiate career next Saturday against Alabama. Fournette and LSU can control their destiny if they can find a way to top the Tide next Saturday. Like I said for Alabama, this is the biggest game of the year in the SEC West, and the outcome will have an impact on the playoff selections. If the Tigers are able to beat Alabama, the Crimson Tide will most likely be eliminated from the playoff race. It will be interesting to see where these two teams find themselves in the Playoff Committee's first top 25, which debuts Tuesday.