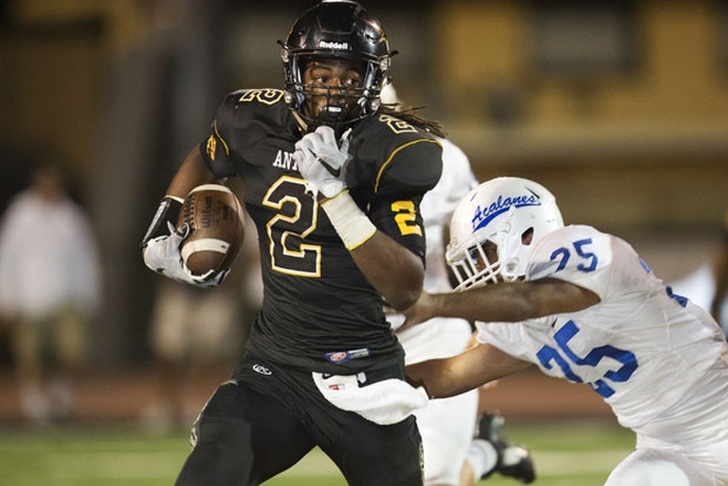 Spring Practice is already well underway for SEC programs across the nation, but recruiting hasn't been ignored. Recruiting is basically a year-round event, and every SEC team is hard at work putting together a strong 2017 recruiting class. Here are the top 7 recruits that have already pledged their commitments to a SEC program:

7) WR D.D. Bowie - Ole Miss Rebels
Bowie, the No. 10 wide receiver in the class, committed to Ole Miss in October after making an official visit to the school, decommitting from Alabama. A Mississippi native, Bowie has game-breaking speed at 6'1" and 170 lbs.

6) S Richard LeCounte III - Georgia Bulldogs
The No. 2 safety in the country, LeCounte has decided to stay in-state by committing to UGA, which he did back in December. Head coach Kirby Smith made keeping him on board one of his top priorities once he took the job. However, Ohio State is also pursuing him hard and could flip him.

5) QB Tate Martell - Texas A&M Aggies
Martell, the top-rated dual threat QB in the country, is the latest high profile QB recruit head coach Kevin Sumlin has landed, and he is expected to be the starter as soon as he steps on campus.

4) QB Jake Fromm - Georgia Bulldogs
Speaking of quarterbacks, Fromm is the No. 3 pro-style quarterback in the country and decommitted from Alabama before committing to Georgia on March 3. However, the Tide are still very much in the mix to land him, as is Ole Miss.

3) DT Tyler Shelvin - LSU Tigers
Shelvin committed to LSU in March of 2015, and he hasn't wavered on his commitment since then. The No. 2 defensive tackle in the country, Shelvin already has elite size and strength at 6'2" and 329 lbs.

2) OT Calvin Ashley - Auburn Tigers
The No. 2 tackle in the nation has already committed to the Auburn Tigers. He made his pledge back in May 2015, but he is still looking at other schools - Florida State, in particular, is making a strong push to land him.

1) RB Najee Harris - Alabama Crimson Tide
The nation's top running back is from California, but committed to Alabama in April 2015. At 6-foot-2, 220-pounds, he could be the next great Alabama running back. However, he is still listening to other schools.