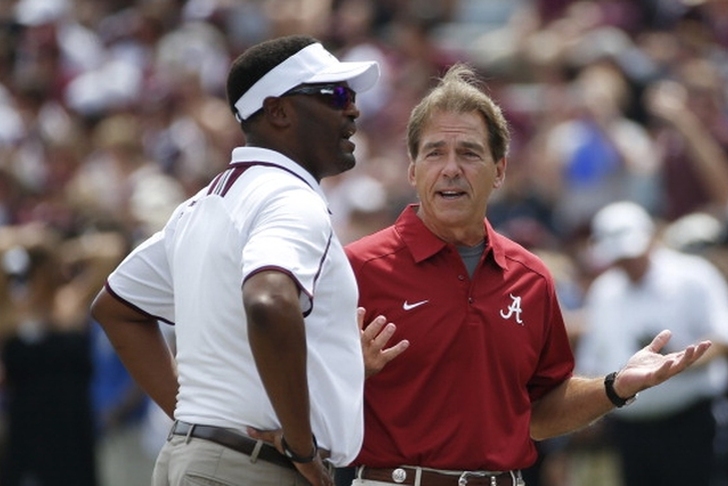 The NCAA will tell you that college sports aren't about money, but we all know that they've become big business - especially in the SEC. Most of these men are their university's highest-paid employee, and some make several times as much as their school's president. Here are the five highest-paid football coaches in the SEC:

Malzahn is 20-7 in his first two years with Auburn, including the team's rousing run to the last national championship game of the BCS era in 2013-14. An offensive mastermind in his second stint with the Tigers -- his first being as the program's offensive coordinator -- Malzahn's undeniable charisma on the recruiting trail and on-the-sideline smarts should have him as a top-tier fixture of the SEC's coaching ranks through this decade and beyond.

Freeze signed a massive extension in December following Ole Miss' breakthrough 2014 campaing, and his contract includes a clause to bump his salary to $5 million if the Rebels reach the SEC Championship Game. Though he's still proving himself in the SEC, Freeze is 24-15 in three seasons at Ole Miss, and has quickly turned them into a national power.

Miles has lost some prestige due to the team's slow downward trajectory over the past three seasons. However, while the Tigers finished outside the AP top 25 last season for the first time since 2008, LSU still has averaged a 6.8 finish nationally in recruiting rankings over the last five years. With that type of talent in the wings, Miles has plenty of ammunition - and the track record to prove he knows what to do with it.

Sumlin is under contract through the 2019 season and is 28-11 in three seasons with the Aggies, including bowl victories each year. He signed an extension in December 2013 due to Texas A&M's immediate success in their first two years in the SEC, and despite a down year in 2014, he seems poised to lead them to the top of the conference sooner rather than later. Over Saban’s eight years in Tuscaloosa, Alabama has won 10 games or more seven times and has not dropped more than one game in SEC play in four years -- an incredible feat in the death conference to end all death conferences. Plus there's the matter of those three BCS National Championships within a four-year span, and the fact that he's lost 11 games in seven seasons since the team's NCAA sanction mess in 2007. He's the unquestioned top coach right now, and will be for as long as he wants to coach.