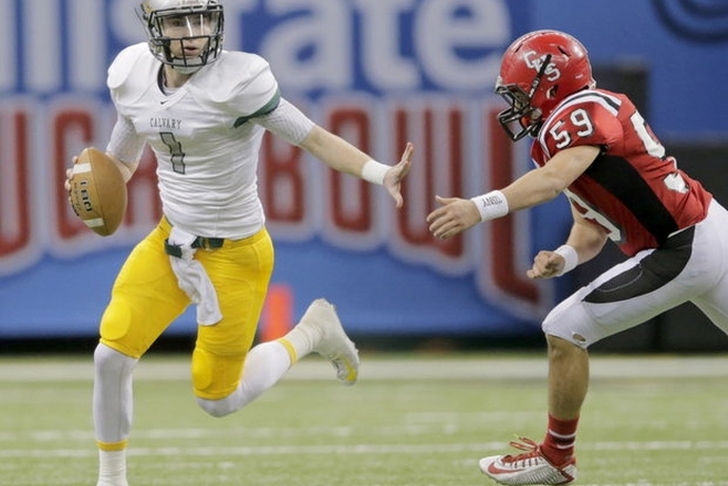 The SEC is one of the best conferences in college football, and with great recruiters like Nick Saban and Les Miles in the conference, it's no surprise that the SEC has more NFL talent than any other conference. This is based on 247sports's rankings and every player on this list is a top 30 recruit. With that in mind, here are SEC Football’s 10 Best Committed Recruits For 2016 So Far:

10) Marlon Davidson, DE, Auburn Tigers
The No. 9 overall recruit in the country, Davidson appears to be one of the best pure pass rushers in this class. At 6'3" and 279 lbs, Davidson is already a powerful guy that is difficult to block. Throw in his elite speed and quickness and, well, you have one of the nation's best players.

9) Antonneous Clayton, DE, Florida Gators
Clayton still needs to add some strength to his 6'3", 218-pound frame, but he has all the makings of a dominant speed rusher off the edge. He is ranked as the No. 2 defensive end and No. 26 overall prospect in the country.

8) Benito Jones, DT, Ole Miss Rebels
Jones has already enrolled at Ole Miss and is expected to take Robert Nkemdiche's starting job in the middle of the defensive line. At 6'2" and 285 pounds, Jones already had the combination of power and speed to give opposing offensive linemen fits.

7) Rashard Lawrence, DT, LSU Tigers
Lawrence is one of the bigger recruits in the country at 6'3" and 305 lbs and does need to shed some baby weight, but there's no question how dominant he is on the football field. LSU hasn't had a dominant defensive tackle for the past few years, and Lawrence should step right in and start, making a big impact from day one.

6) McTevlin Agim, DE, Arkansas Razorbacks
The top recruit in the state of Arkansas decided to stay close to home, and Razorback fans are rejoicing. At 6'3" and 268 pounds, Agim runs a 4.7 40-yard dash, showing you that he has all the physical tools to be a star in the SEC. Once he gets his technique down, he'll be a menace.

5) Jonah Williams, OL, Alabama Crimson Tide
Alabama has a history of churning out dominant offensive linemen, and Williams appears to be the next in line. The nation's No. 2 rated tackle is effective blocking for both the run and the pass, and has the size (6'5", 280 lbs.) to make an immediate impact next year.

4) Issac Nauta, TE, Georgia Bulldogs
He's a fantastic blocker and a perfect prototype for the modern tight end on offense. He has legit size at 6'3" and 245 pounds, and is an excellent route-runner with stellar hands. An early enrollee at UGA, the comparisons to Jason Witten are warranted.

3) Jacob Eason, QB, Georgia Bulldogs
The perfect combination of throwing power and pinpoint accuracy, Eason's deep ball is a thing of absolute beauty. Every throw he makes looks effortless, and his all-world footwork in the pocket allows him to shift his weight to both evade pressure and step into throws in the tightest of spaces. Reminiscent of former Georgia QB Matthew Stafford, Eason's going to put up pinball-like passing numbers at the next level.

2) Shea Patterson, QB, Ole Miss Rebels
Patterson is the quintessential dual-threat quarterback. He uses his legs to evade defenders and exhaust coverage schemes, creating big plays out of thin air thanks to sheer persistence and top-tier mobility. There's not one quarterback in this class who throws with more power and accuracy in a variety of different pressure situations. That adaptability and pure athleticism is going to give SEC defensive backs nightmares down the road.

1) Gregory Little, OL, Ole Miss Rebels
Little is the country's No. 3 overall recruit, and after watching his highlight video, it's easy to see why. He already has prototypical size at 6'5" and 282 pounds with the strength and athleticism to play either tackle or guard.