Get inspired by the trailblazers in women’s soccer 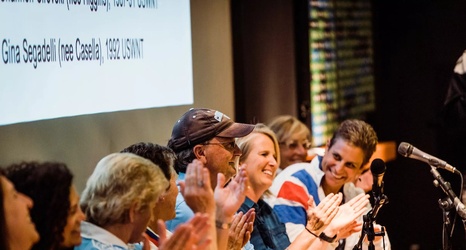 In August, in front of a sold-out crowd, Washington State Legends of Soccer hosted a panel discussion titled “From Washington to World Cup” at The NINETY. Moderated by Leslie Gallimore, the event featured some of the trailblazers in women’s soccer — many who hailed from Washington state.

The star-studded event featured moderator Lesle Gallimore, who just retired after coaching the U.W. women’s team for 26 years; longtime U.W. assistant coach and U.S. Deaf Women’s Soccer Team Coach Amy Griffin; UNC women’s soccer coach Anson Dorrance, who also coached the USWNT from 1986-1994; Jan Smisek, who became the first women to receive a USSF C License in 1975; Kerri Hunt, a Seattle native who was a select player before that was really a thing for women and went on to coach at Bellevue College; Kathy Ridgewell, a forward who made USWNT appearances in the 1980s when the team was just forming; Sandi Yotz (Gordan), a defender who made seven appearances for the USWNT right when it formed in the 1980s; Shannon Cirovski (Higgins), former U.