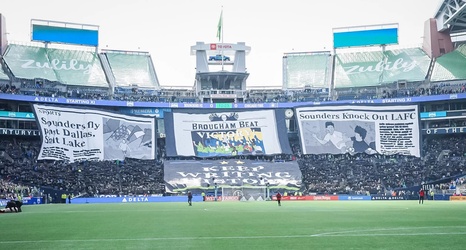 In honor of the Seattle Sounders’ second MLS Cup championship, Emerald City Supporters unveiled a tifo befitting the accomplishment. The four-curtain choreo filled most of the Brougham End with a mocked-up newspaper chronicling the Sounders’ path to the title.

The first curtain depicts Jordan Morris celebrating his hat trick against FC Dallas in front of ECS. The opposite curtain shows Xavier Arreaga’s shoulder-to-shoulder challenge on Carlos Vela in the Sounders’ 3-1 win over LAFC. The center curtain shows the Sounders standing on the stage with medals around their necks following the MLS Cup final with the words “Keep writing history” in the final curtain below.