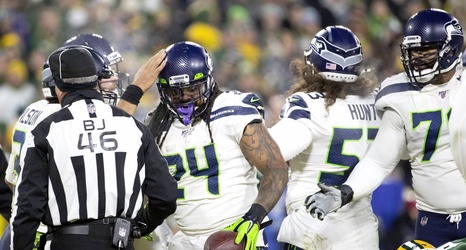 The message Marshawn Lynch delivered to his teammates and fellow players around the league in what might have been his last act as a Seahawk— “Take Care of ‘Yo Chicken” — is also now one that anyone can wear on a hoodie or T-shirt thanks to Lynch himself.

Clothing with that slogan, though with the C designed as a dollar sign, showed up available through Lynch’s Beastmodeonline.com website Tuesday, and presumably also available at his stores in Seattle and Oakland. A hoodie sells for $70, a T-shirt for $39.95.

Chicken is a slang term for money, and taking care of your money was a key part of Lynch’s message to teammates, as well as players around the league, during a post-game press conference Sunday following a 28-23 loss to the Packers.