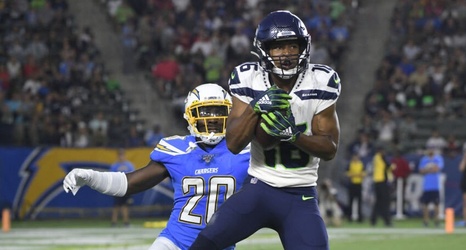 CARSON, CA - AUGUST 24: Tyler Lockett #16 of the Seattle Seahawks catches a pass while being defended by Desmond King #20 of the Los Angeles Chargers during a preseason NFL football game at Dignity Health Sports Park on August 24, 2019 in Carson, California. The Seattle Seahawks won 23-15. (Photo by John McCoy/Getty Images)

The Seahawks play the Chargers in both teams’ final preseason game of 2021. Seattle has looked horrible in its first two preseason games but then most of the starters haven’t played at all. There is a chance that Seattle might play a few more on Saturday but coach Pete Carroll would guarantee nothing.