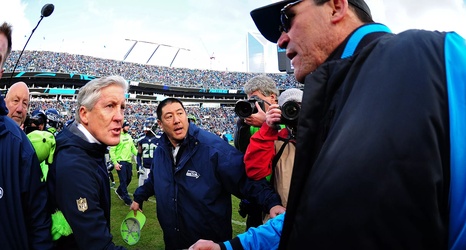 Up until this week, the only in-season head coach firing of the 2019 NFL season was Washington canning Jay Gruden. Washington’s surprising 29-21 road win over the Carolina Panthers last weekend has resulted in the second in-season departure.

The fading 5-7 Panthers have immediately relieved Ron Rivera of his head coaching duties. He’ll be replaced through the rest of this season by Perry Fewell, whom Seattle Seahawks fans may remember when Fewell’s New York Giants defense gave up 350 yards to the Seahawks rushing attack in 2014. Rumor has it that Jason Pierre-Paul is still looking for Russell Wilson.