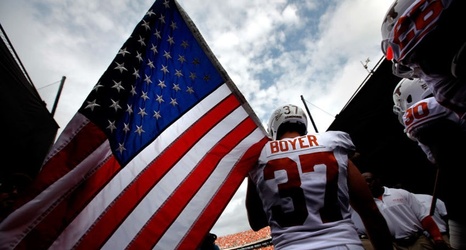 DALLAS, TX - OCTOBER 13: Nate Boyer #37 of the Texas Longhorns carries an American flag as the Texas Longhorns take to the field against the Oklahoma Sooners at Cotton Bowl on October 13, 2012 in Dallas, Texas. (Photo by Tom Pennington/Getty Images)

If the Seahawks needed a new long snapper after an unfortunate injury to Tyler Ott, then the first thing Seattle should do is re-sign Nate Boyer.

I do not write the following because I want Seahawks long snapper Tyler Ott to get hurt. Ott is everything a team would want in a long snapper.