Get your “Take Care Of Y’all Chicken” t-shirt and hoodie today! 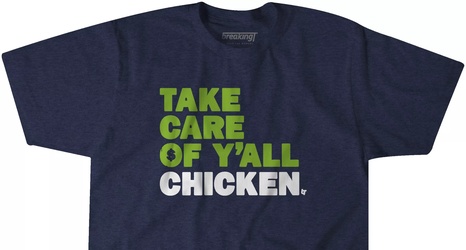 The Seattle Seahawks’ season is unfortunately over, and consequently it’s the probable end of Marshawn Lynch’s unexpected but memorable second stint with the team. If it is his swan song, the man got up off the couch and scored four touchdowns in three weeks behind an offensive line that finished the year playing Phil Haynes at left guard and Jordan Roos for a few snaps at center.

In what may be the final press conference of his career, Lynch had some words of advice for young players in this league about handling their finances and their careers.