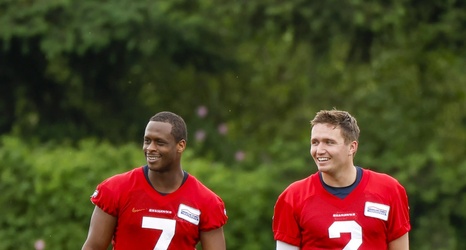 As most of us have been speculating for months now, the Seattle Seahawks opened up training camp with a theoretically open competition at quarterback with no clear favorite. As things stand at the moment, Geno Smith and Drew Lock are getting most of the attention, although neither has seized said moment and instead have been reportedly struggling to get their bearings early on. Offensive coordinator Shane Waldron told the press on Tuesday that they “have a plan” at the position but are being secretive about it.

Now, this isn’t surprising to anybody, and in no way is that a dig at either of these players; it should be expected that the defense is ahead of the offense at this point, and the team is trying to identify a starter at the most important position on their offense after a decade of stability under Russell Wilson.