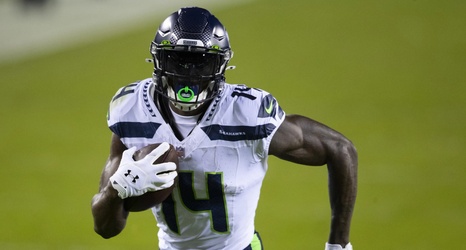 DK Metcalf has decided to take his talents from the football field to the track this offseason. According to a tweet from USATF (USA Track and Field), the Seattle Seahawks speedster will be racing in the USATF Golden Games which will be live at 1:30 PM PT on NBC this Sunday (May 9).

From the gridiron to the track.

Watch @dkm14 this Sunday at the USATF Golden Games Presented by @Xfinity live on NBC.#USATF #JourneyToGold https://t.co/mzvsdlDPFN— USATF (@usatf) May 3, 2021

In the video posted by DK, which was then quote tweeted by USATF, he appears to be promoting his participation in the race as some sort of publicity stunt for his cleats sponsor Under Armour.