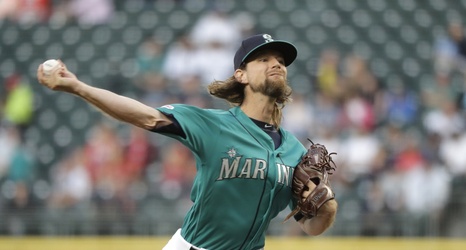 One week after perhaps the most imperfect start of Mike Leake’s career, he flirted with perfection.

Leake retired the first 24 batters he faced, Daniel Vogelbach hit a pair of three-run homers and the Mariners defeated the Los Angeles Angels 1o-0 on Friday night at T-Mobile Park.

They were the same Angels that seven days earlier had no-hit the Mariners in a 13-0 win, with Leake giving up seven runs — four earned — in two-thirds of an inning, the shortest start of his 10-year big-league career.

So what happened this Friday? A turnaround that was hard to fathom, even if the perfect bid ended when Luis Rengifo hit a grounder through the right side to end the perfect game and no-hit bid.