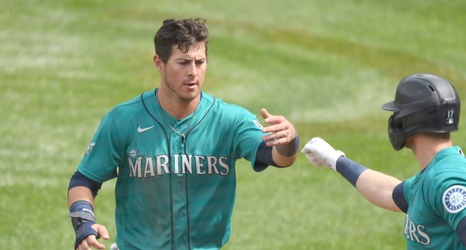 BALTIMORE, MD - APRIL 15: Dylan Moore #25 of the Seattle Mariners celebrates scoring on J.P. Crawford #3 (not pictured) double in the sixth during game one of a doubleheader against the Seattle Mariners at Oriole Park at Camden Yards on April 15, 2021 in Baltimore Maryland. All players are wearing the number 42 in honor of Jackie Robinson Day. (Photo by Mitchell Layton/Getty Images)

Disclaimer. I know that isn’t JP Crawford in the picture. It is instead Dylan Moore, who he drove in as the go-ahead run. Now, back to the regularly scheduled article. JP Crawford has had two different seasons up to this point.