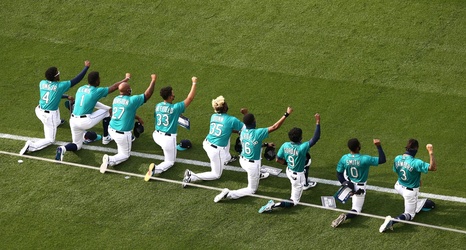 Two months ago, at the height of the calls for racial justice and equality that reverberated from corner to corner across the nation, baseball teams found themselves in unfamiliar territory: with Black players in the league joining the calls for justice, teams could no longer in good conscience uphold the “stick to sports” mantra that had dictated official communications for so long. As Black Lives Matter signs cropped up on websites, t-shirts, and reader-boards across the nation, not saying anything became more of a political statement than saying something. And so teams drafted their own “Black Lives Matter” statements for social media and donned t-shirts and put “BLM” on pitching mounds and bases and posted black squares on #BlackOutTuesday.