In Evan White, Mariners see their first baseman of the future (or at least the next nine years) 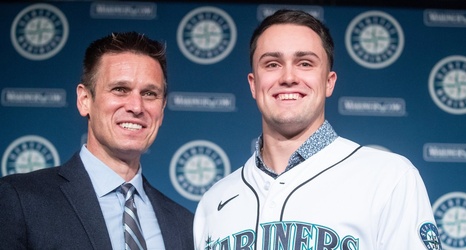 Evan White slipped on the crisp, white Mariners’ jersey with the No. 12 on the back, fumbling with the buttons and shaming himself for his clumsiness, while apologizing for taking so long as people waited to take his picture.

He was the first player in the organization to slip on the 2020 game jerseys featuring a Nike swoosh, the symbol of Major League Baseball’s newest uniform partner.

And if all goes right with his progression to the big leagues, White will be wearing some form of a Mariners’ jersey for the next nine seasons.

On Monday, the Mariners officially announced that White, their No.