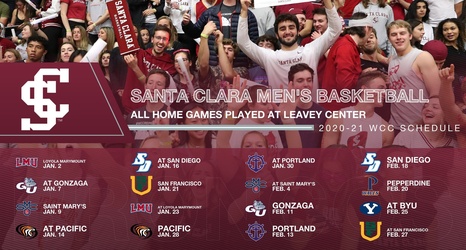 SAN BRUNO, Calif. - The Santa Clara men's basketball team has one portion of its 2020-21 schedule set as the West Coast Conference announced the 16-game slate.

The nonconference schedule will be released once finalized. The NCAA announced last month that teams may begin competition on Nov. 25.

League games will continue to be played on Thursdays and Saturdays with the Broncos opening with a home contest against Loyola Marymount on Jan. 2 and ending on the road against rival San Francisco (Feb. 27).