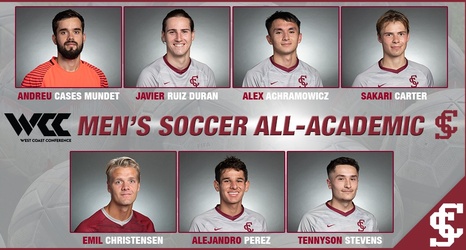 SAN MATEO, Calif. – Santa Clara men's soccer had seven players honored for their work in the classroom by the West Coast Conference on Monday when Andreu Cases Mundet and Javier Ruiz Duran were named to the All-Academic Team and five others – Alex Achramowicz, Sakari Carter, Emil Christensen, Alejandro Perez and Tennyson Stevens – named as honorable mention.

Cases Mundet, a graduate transfer goalkeeper from Wake Forest, and Ruiz Duran are both working towards a master of arts degree in educational leadership and have GPAs of 3.