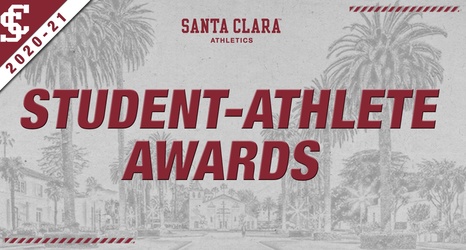 SANTA CLARA, Calif. - With the academic year coming to a close, Santa Clara Athletics recognized its student-athletes with an awards ceremony on Thursday evening.

Due to COVID-19 guidelines, teams were addressed individually by director of athletics Renee Baumgartner at the Schott Athletic Excellence Center before awards were bestowed and the student-athletes received their letter awards.

Jack Davidson of men's cross country/track and field and Matt McCarty of men's golf shared the Pat Malley Award as the Bronco male student-athlete of the year.

Davidson became the first men's runner in program history to qualify for the NCAA Cross Country Championship, where he took 65th place.