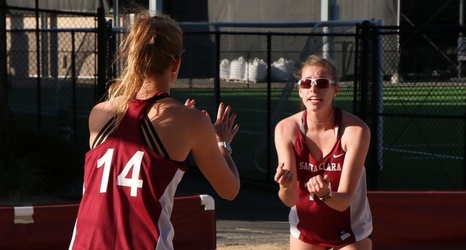 SANTA CRUZ, Calif. — Santa Clara beach volleyball started off its 2021 season with a dual victory and finished with a split on Thursday at the WCC Midseason Invitational. The Broncos topped Pacific 4-1 before falling to Saint Mary's 4-1 at Santa Cruz Main Beach.

Santa Clara's win over Pacific marked its first season-opening dual triumph in the last five years, dating back to a 5-0 sweep of Portland on March 10, 2016.

The Broncos (1-1, 1-1 WCC) won at flights one (Michelle Shaffer/Julia Sangiacomo), two (Claire Doud/Kathryn Decker) and four (Elizabeth Held/Nani Spaar) in straight sets over the Tigers (1-3, 0-2), with each match featuring one set that went past the 21-point mark.