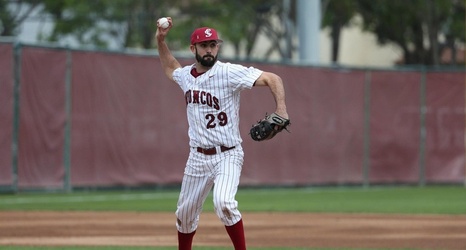 MALIBU, Calif. – Santa Clara baseball claimed a series sweep of Pepperdine on Sunday as the Broncos won 8-2 at Eddy D. Field Stadium. Senior Jacob Steffens earned his third complete-game victory of the year and junior Jake Brodt hit a grand slam in the ninth to secure the victory.

Santa Clara (11-31, 7-11 WCC) right-handed pitcher Jacob Steffens had a remarkable outing for the Broncos. In his third complete game of the season, he allowed six hits, two earned runs and walked two batters while striking out seven. Pepperdine (17-24, 6-12 WCC) went 0-for-9 at the plate with runners in scoring position while the Broncos had seven two-out runs batted in on the night.