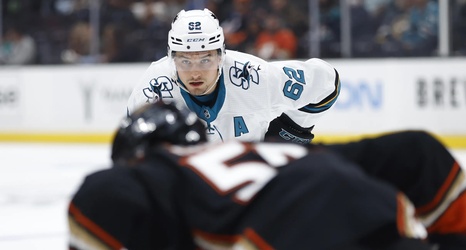 With just two preseason games left, the San Jose Sharks are down to the tough decisions. Ahead of yesterday’s 3-1 win over the Anaheim Ducks, the team announced that five players had been reassigned to the San Jose Barracuda: forwards Joachim Blichfeld, Noah Gregor and Scott Reedy, as well as defender Mark Alt and goaltender Zachary Sawchenko will all report to the AHL training camp. Forward Tristen Robins was also returned to the Saskatoon Blades for his fifth WHL season.

That brought the camp roster down to 40 players. Then this morning, forwards Jayden Halbgewachs, Joel Kellman and Nick Merkley, as well as defender Jaycob Megna were all placed on waivers, for purposes of assigning them to the Barracuda.