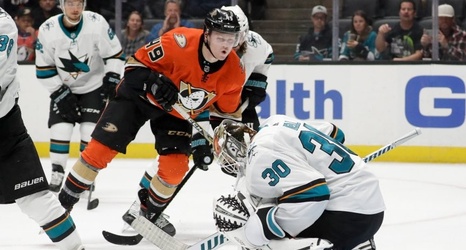 ANAHEIM — Three games into the regular season and the Sharks still have never enjoyed a lead.

And Saturday night at the Honda Center, the Sharks’ game against the Anaheim Ducks was tied for less than five minutes.

After two disheartening losses to the Vegas Golden Knights to start the season, the Sharks were once again their own worst enemy in what be came a 3-1 loss to the Ducks.

After a goal by Logan Couture at the 5:44 mark of the second period tied the game 1-1, Ryan Getzlaf scored just 67 seconds later, taking advantage of change attempt by Marc-Edouard Vlasic, finding open space in the Sharks zone and beating Aaron Dell for his first goal of the year.