Sharks’ Bob Boughner explains his goalie rotation for this weekend 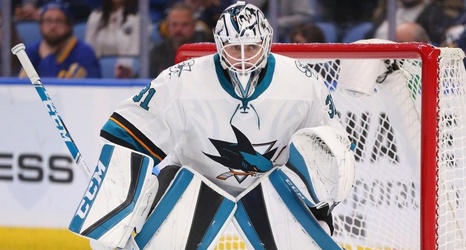 SAN JOSE — Sharks interim coach Bob Boughner plans to have Aaron Dell in net for Friday’s game with the Winnipeg Jets and give Martin Jones his first start in over two weeks Saturday in Minnesota.

Dell and the Sharks are coming off a 6-2 loss to the Calgary Flames on Monday. Dell faced 37 shots in the game, including 29 in the first two periods when the Sharks were shorthanded three times and the Flames built a 4-2 lead.

“I don’t put any of that game on (Dell),” Boughner said. “We were not detailed and structured, and I thought we left him out to dry a little bit.