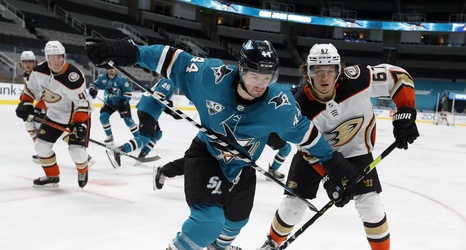 A few San Jose Sharks forwards are questionable for tonight’s game against the Anaheim Ducks at the Pond. Timo Meier is pencilled into the lineup, back on Tomas Hertl’s wing. Hertl was out for six games due to COVID-19 protocols, while Meier has missed the last two with a lower-body injury. Rudolfs Balcers isn’t on the expected lineup, and is potentially a game-time decision with an undisclosed injury, described by head coach Bob Boughner as “a little nicked up.”

Troy Terry and John Manson are both expected to miss a second-straight game for the Ducks.