Sharks 6, Oilers 3: Dell commands the net, the kids provide a boost and plenty of ‘painful’ goals 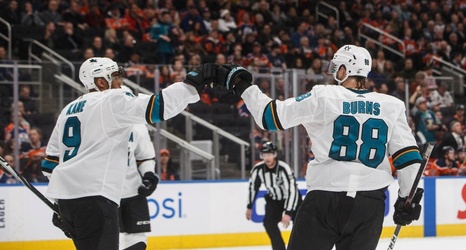 EDMONTON — Bob Boughner came out of the NHL All-Star break with the plan of playing his goalies on more of a rotating basis. Despite how well Aaron Dell had been playing before the break, Boughner didn’t want Martin Jones to continue to sit for long stretches at a time.

So Dell started Jan. 27, when the Sharks beat the Anaheim Ducks 4-2. Jones started two nights later in a 5-2 Sharks loss to the Vancouver Canucks.

That plan to give Jones more regular action might be on hold, at least for the immediate future, as Dell continues to give the Sharks a chance to win in almost every start he makes.