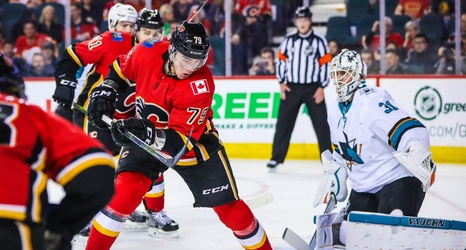 In possibly the final time this preseason that we get a glimpse of the Sharks’ somewhat bright future, the boys dropped a high-scoring affair against the Calgary Flames by the score of 7-5.

The Sharks jumped out to an early 4-1 lead in the first period, but a less-than-decent defensive performance saw that lead evaporate in the second and third periods. Johnny Gaudreau, in particular, killed the defense, scoring two goals tonight.

Interestingly, Peter DeBoer went against his typical preseason tactics and swapped out Aaron Dell for Antoine Bibeau a little bit past the halfway point of the second period.