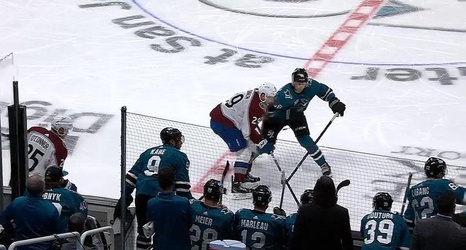 Everyone is talking about San Jose Sharks forward Joachim Blichfeld’s season debut, but it’s not good news for the 22-year-old.

About halfway through the third period of last night’s 4-0 loss to the Colorado Avalanche, Blichfeld was heading back to the bench and laid a hit on Avalanche forward Nathan MacKinnon. Though Blichfeld may have intended for shoulder-to-shoulder contact, the hit instead saw primary contact between Blichfeld’s shoulder and MacKinnon’s head.

MacKinnon left the game to enter concussion protocol. Blichfeld was assessed a match penalty and the Avalanche had a five-minute power play.