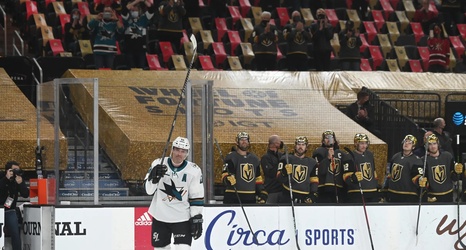 This season hasn’t exactly made planning for this moment easy. Though it was likely that Patrick Marleau would break the record for all-time NHL games played, it wasn’t a certainty, — between injuries, illness, trade rumors and season with a number of rescheduled games that is probably also record-setting, the window was smaller than it would’ve been in a normal season.

After the first shift — where Marleau opened on the wing — this message from NHL commissioner Gary Bettman played on the jumbotron (transcription below):

“To be merely mentioned in the same sentence as Gordie Howe is an achievement most hockey players can only dream about.