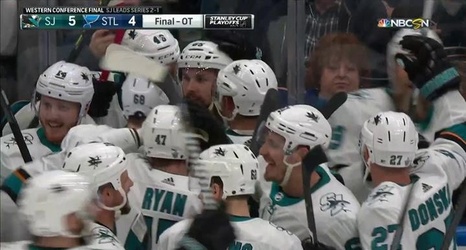 If the Sharks advance to the Stanley Cup Final, they'll be headed to Boston. That's because the Bruins completed an Eastern Conference finals sweep of the Carolina Hurricanes on Thursday night.

Boston shut out Carolina 4-0 in Game 4, sealing the Bruins' third appearance in the Final this decade and their first since 2010.

The Bruins will have home-ice advantage when they face the winner of the Western Conference final, thanks to their 49-24-9 (107 points) record in the regular season. Should the Sharks eliminate the St. Louis Blues, Joe Thornton will be shipping up to the city of his former team.