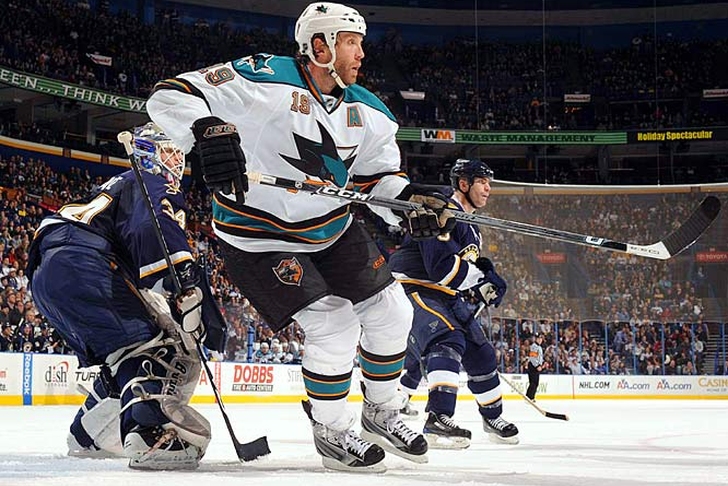 The Sharks' offense was a five-on-five liability last season.

Soak that up. It doesn't seem right nor does it feel right in comparison to what we have come to expect from the talented, all-world group of forwards who reside on the Sharks' top three lines.

Yet, as a Number Muncher would say..."nom om nom mmmmmm sevens taste better than sixes, but not as good as fours nom om nom om...

The Sharks' problems with creating offense seem to be a matter of space not talent.

With all-world offensive talents such as Jumbo Joe Thornton, Patrick Marleau, Joe "Big Game Hunter" Pavelski, and the emerging superstar that is Logan Couture, it is a solid shock to the system to see such paltry production in non-penalty situations.

A big part of the problem was an inability to sustain pressure from blue line to blue line, with errant and/or ill-timed passes leading to stunted or evaporated offensive chances. While the Sharks had no problem pushing the puck at the net with extreme frequency, the lack of quality chances generated with both teams at full-strength bit them (Pee-Wee Herman pun-alert!!!! Make sounds!!! Ahh!) at the most inopportune of times. For example, a couple more quality cycles and chances in the Kings' series may have been the difference in an extremely tight and entertaining series. That, or Jonathan Quick would have had to magically turn into a chair or household appliance, rather than an all-world netminder.

Can Logan Couture, Tyler Kennedy, and the other young offensive role-players on the Sharks help reverse this trend?

Logan Couture's 21 goals during the 2012-13 would have projected over a full, non-Gary Bettmanned season to have a chance at nicking 40. His durability, consistency, and wicked left-handed shot were a huge plus for the streaky Sharks. As he went, so did the rest of the offense. Couture looks primed to continue and build upon his breakout year, but the youth movement does not look to end there.

The acquisition of Tyler Kennedy from the Pittsburgh Penguins gives them a young high-energy shooter who can project into any of the top three lines with relative ease. The fact that he has a Stanley Cup-stamped feather in his helmet helps tremendously as well, as you can never underestimate the power of youth that his been there before.

With other under-thirty forwards such as Brent Burns, Tommy Wingels, and the aforementioned playoff superstar, Joe Pavelski, projected to play extremely key roles for the Sharks this season, the question becomes whether talent can bridge itself towards consistency. If so, and one of the young role players can blossom into a solid NHL threat, the Sharks' offense could see a dramatic turnaround sooner rather than later.

The swans are swimming around Joe Thornton and Patrick Marleau. Will they chomp down when the Sharks need them most?

Doesn't this goal seem like it happened four eons ago during a simpler time in hockey?

Well, it was definitely just three seasons ago where it finally looked like Jumbo Joe would finally become Playoff Legend Joe. However, don't look at Joe Thornton, or even Patrick Marleau as the reason why the Sharks stalled against the Kings last year. Thornton posted a healthy 5 in plus/minus, while Marleau's five goals, three assists, and generally consistent play earned him an even for the playoffs.

However, is this good enough? Even with the emergence of Couture, the Sharks need their all-world superstar play-makers to up their game into the stratosphere when the puck weigh more and the emotions run higher. Simply being good will not beat a goaltender utilizing adrenaline to levitate upside down over the course of a seven-game series.

If one of these guys can throw off the aches and constant pain of being in their mid-3os in such a violent, high-impact sport, and utilize the young offensive tools on the rest of the roster, five-on-five production and overall production will skyrocket when the chips are down.

The hump is there. The superstars and solid contributors of the Sharks' offense just need to find a way to swim over it.

Check back on Friday for part 3 of our season preview of the Sharks. We will take a look at the Sharks' defense, and whether an increase in overall physicality is a good or bad thing.