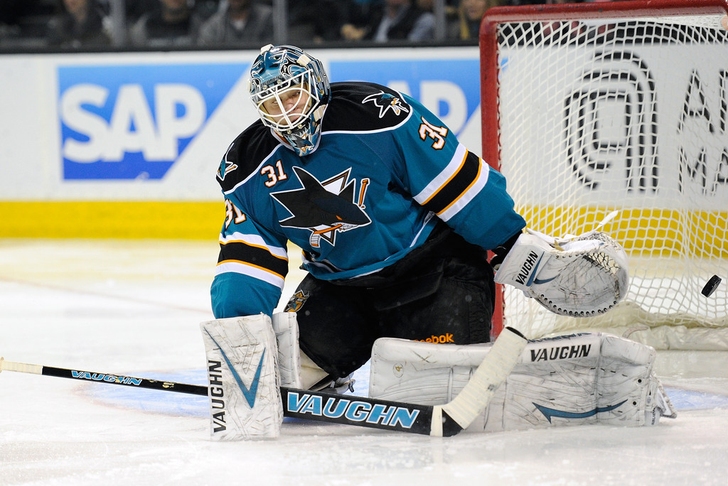 In truth, 30 is just a number. However, it is a visceral signifier of a new stage where the aches and pains and struggles which accompany advancing adulthood take an exponentially more prominent role.

So, what does this mean for Antti Niemi, the Sharks' Finnish superstar netminder? With just 4 years and some change of NHL experience (along with almost a season's worth of playoff time logged,) it almost seems ludicrous to intimate that Niemi may be due for a bit of regression. However, he has 13 years of overall junior/professional time logged, along with a sharp comparative increase in ice time over his past 3 seasons with the Sharks. In this we can find a few causes for, if not concern, then perhaps inquisition.

The Art of Being the Man

The magical 2009-10 Blackhawks run to the Stanley Cup was an impressive display of offensive bludgeoning (3.55 goals scored per game) and timely stops by Niemi between the pipes. After wrestling the full time job away from the streaky Cristobal Huet (side note: Huet was the first Frenchman to ever hoist a Stanley Cup as a player. Despite playing in 48 games during the 2009-10 regular season, he logged just 20 minutes of ice time during Chicago's 22-game playoff run to the Stanley Cup,) Niemi out-dueled goalies such as Roberto Luongo and the capital-M Man who preceded him in San Jose, Evgeni "I know where the bodies are hidden" Nabokov.

Here's the problem. Niemi's GAA during that postseason was a pedestrian 2.63. His save percentage of .910 would have ranked him outside the top-20 of NHL goalies during the 2009-10 regular season. While never losing form in such a way as to become a liability, Niemi was far from stellar on his own accord. Simply put, the Chicago offense bailed out a talented kid who might have been in over his head otherwise.

Fast forward to last season, Niemi's third season with the Sharks. After streaky play over his first two seasons with San Jose which resulted in substandard performances in the playoffs, Niemi tied for the league lead in wins (24) with Niklas Backstrom of the Wild and the man whose prettiness makes deer immune to headlights, Henrik Lundqvist of the Rangers.

WARNING: There is a picture of Henrik Lundqvist to the left. Do not look in the mirror for 6 hours after seeing his visage. Depression is a real thing, people.

Ahem. Anyways, Niemi was (barely) a fringe Vezina contender last year. He had the seventh-best regular season GAA of goaltenders who started 30 games or more, at 2.16. His save percentage of .924 tied him for sixth in that same group with James Reimer of Toronto.

The problem comes when you look at the load Niemi has been asked to take on over his time with the Sharks. 2010-11 marked the first time Niemi had played more than 60 games in ANY season. Combining both regular season and playoffs, Niemi appeared in 78 games in 2010-11, including a pretty awful shelling in the Sharks playoff run to get kicked in the genitals by the Canucks (3.22 GAA and .896 save percentage.)

The load didn't get much lighter the next year, as Niemi played in an astronomical 67 of the Sharks 82 regular season games, before the Sharks turned into expired tuna in a five-game outclassing handed out to them by the Blues.

Last year, Niemi was beyond solid in net come playoff time, before running into a man who has a magnet in his chest that finds every f($$$)-ing puck, Jonathan "I hate you" Quick and those Los Angeles Kings of Dream-Killing.

The problem again, however,  is that Niemi led the entire NHL in minutes played last year. While it was only a 48-game schedule, Niemi played in 54 games total with the playoffs included, and showed visible signs of wear at different points in the Sharks' extremely bipolar campaign. After the grueling seven-game loss against the Kings in the Western semifinals, it almost looked like Niemi's eyes had been replaced with glassy collectable buttons. Tiredness reigned.

With unproven netminders Alex Stalock and Thomas Heemskerk behind him, the load only looks to get more burdensome. Does Niemi have the gas in the tank to play 85-90 games with playoffs included, while saving his best for a 16-win run to the Sharks first cup?

I am pessimistic about it, but it could happen. There is always the trade market to bring in a quality number 2 goalie to take 30 games off of Niemi's slate. However as of now, it looks like it's Niemi...OR DIE...in the Silicon Valley.

This was part 1 of a 5-part series on the upcoming 2013-14 San Jose Sharks' season. Come back on Saturday, 9/14 for a look at Joe Thornton, Patrick Marleau, and the all-world talent that the Sharks have on the front lines.