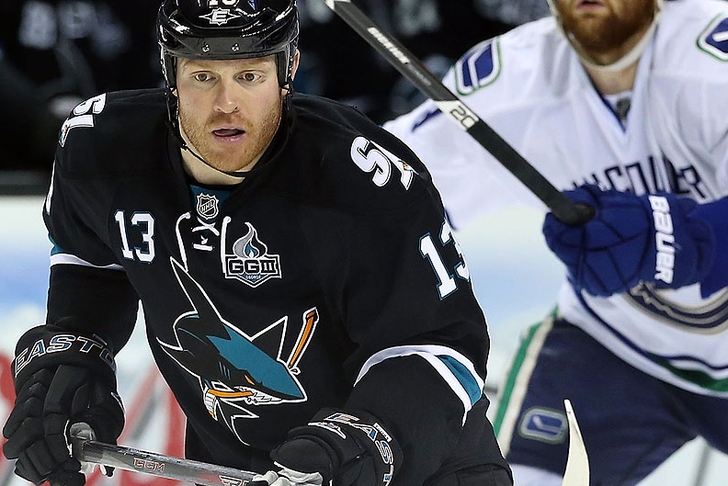 We got nastier last year.

We, being this Sharks team which I have an abnormal sense of ownership over in my own head, despite my inability to ice skate unless drunk or pulled,ran over by a zamboni.

Raffi Torres, just by his very "I will eat your Pomeranian" looks and even more savage high-impact style, made a San Jose Sharks team that has been labeled a "finesse' (soft, dainty, Cirque de Soleil with sticks) team," appear to be something much more dangerous and gritty. And the Sharks believed. At least, they hit like they believed:

The Sharks problem in the seven-game dogfight with the Kings during last year's Conference Semifinals was not physicality. Six of the seven games were decided by one goal, and neither got consistently on track with the puck in possession. This was not for want of offensive firepower on either side. This is because the neutral zone became a hall of "ow, my spleen" horrors with each team reluctant to give up the inch or two that would end the game, the series, and the year.

Go back a year prior to that, when the Sharks got physically dissected by a blue-collar Blues team (Pee Wee Herman pun meter: 7 out of 10) in the Western Conference Quarterfinals, losing four straight after stealing the first game of the series. It was there where it seemed the window was closing. It was there where it seemed that all of the Olympian talent and on-the-puck bedazzlement would not be enough to get the Sharks over the hump.

Raffi Torres, in my humble opinion, was one of the key catalysts in turning this around. Now, Mr. Torres is a lightning rod of controversy. After Torres did/did not leave his feet with his wicked crush of Jarret Stoll, the NHL took Torres' reputation into account, suspending him for the rest of the playoffs:

The Sharks played the series in his image, but it cannot be denied that having him on the ice for the rest of the series could have been the tipping point in turning a very very very close series in favor of the Sharks.

He fights with reckless abandon. He throws his weight around without regards for physics or the health/well-being of others (see Marian Hossa in the 2011-2012 playoffs.) Upon multiple reviews of this hit, it was in fact pretty, legitimately dirty. But, thus is Torres. He most likely dodges calls from the Czar of Player Safety, Brendan Shanahan like someone would a bullish bill collector.

But, you can't deny his impact. You can't deny what this kind of grit does to transform the defensive mindset of a team. How a fore-check can become feared when a forward as unpredictable as Torres is sitting on the bench, gnashing his teeth at the thought of getting in. Whether you agree with the devil-may-care attitude, the Sharks utilized Torres, reputation and all, to refract and re-imagine their team concept.

The Sharks no longer need(ed) to skate around you in circles. They can/could punch you in the mouth just as well.

This is where the reticence comes in. Raffi Torres is on the shelf with an ACL injury that at the minimum will cost him six weeks, and could extend into Winter Classic time based on rehab and recovery. Tyler Kennedy is going to have to slot himself into a Torres-esque role, providing grit on a front-line that needs it. Torres created space with all of his joints and force, and the Sharks will desperately miss this if he is out for an extended period of time.

Now, everyone can pile on Torres, and they may be justified. His YouTube reel alone makes it hard to completely defend him. However, he is a rarity in today's NHL: a forward who plays like a grizzled defenseman, with scoring pop to boot. Losing this kind of dimension could be a critical blow for the Sharks, and they will need to scramble a bit to figure out how to fill the void.