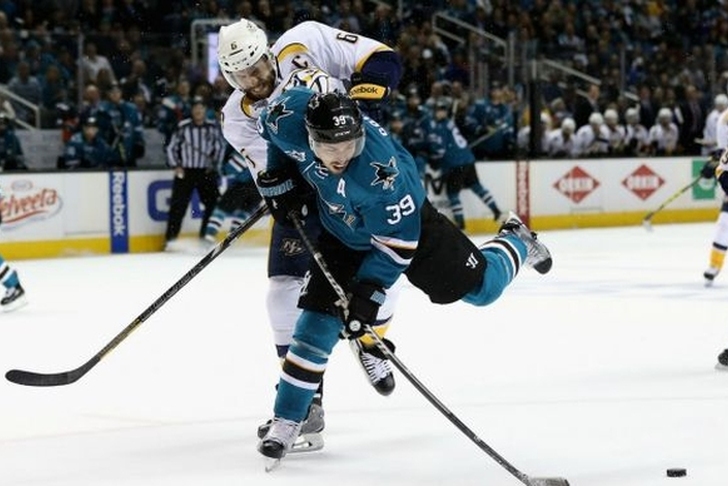 The San Jose Sharks head into Game 6 versus the Nashville Predators trying to punch their ticket into the Western Conference Finals. Though they had one of their best performances of the playoffs in Game 5, the Sharks can't afford to let up if they hope to close it out on the road.

Here are five last-minute notes to catch you up on this series before the puck drops.

5) How To Watch
Game 6 takes place at 9 p.m. ET at Bridgestone Arena in Nashville. The game will be aired on CNBC and streamed on NBC Live Extra, with a radio stream available on SJSharks.com.

3) Game 5 Summary
In case you missed it, the last meeting between these two teams was all Sharks, as Patrick Marleau, Joe Thornton, Joonas Donskoi and Joe Pavelski all got on the board in a 5-1 victory at the SAP Center. San Jose made one lineup tweak in Game 5, swapping Tommy Wingels for Dainius Zubrus on the fourth line, but the more notable change was Marleau moving to the wing alongside Donskoi and Ryan Couture.

2) Historical Significance
The last time San Jose was able to get to the Western Conference FInals was in 2011, when the team lost to the Vancouver Canucks. The year before, the Sharks lost in the West Finals to the Chicago Blackhawks. The Predators have not had nearly as much postseason success in their 18-year history, making this perhaps the most important match in the franchise's history.

1) Tale Of Two Road Teams
The Sharks have lost in eight of their last nine visits to Bridgestone Arena, but was also the best road team in all of the NHL in 2015-16, going 28-10-3. They have had mixed results in the postseason, winning all three of their first-round matchups in L.A. before dropping their last two in Nashville.