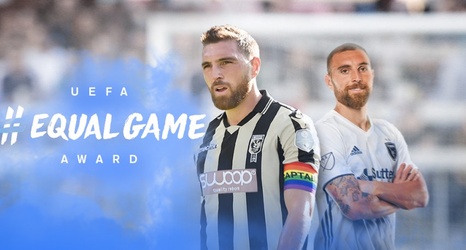 SAN JOSE, Calif. – San Jose Earthquakes Georgian defender Guram Kashia of Georgia has been honored by the Union of European Football Associations (UEFA) with the inaugural #EqualGame award for acting as a role model in promoting diversity, inclusion and accessibility in European soccer.

Kashia, who also serves as the captain of the Georgia National Team, wore a pride captain’s armband for his previous club Vitesse Arnhem during the match against Heracles Almelo on Oct. 15, 2017 as part of the Dutch Football Union’s campaign to promote diversity.

The gesture was received with negative and hostile responses in certain areas in his native Georgia, and there were calls for him to renounce playing for the national team.